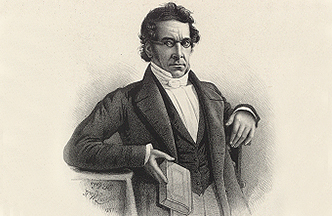 As a young boy of nine years old, he faithfully said his daily prayers, which he always finished off with the words, “I wait for Thy salvation, O Lord!”

By the so-called ‘middle class equalisation’ in 1796, the Jews in Holland received equal rights.
The social status of many Jews improved considerably with assimilated Jews now having the same civil rights as anyone else. In such an emancipated family, Abraham Capadose was born on August 22nd 1795 to parents who belonged to prominent Portuguese-Jewish families. Abraham’s father, Isaac, was a wine merchant in Amsterdam for whom social status was more important than his religious duties.
The young Abraham was raised in a worldly way. He studied the great writers of his time and had Christian friends, for whom Christianity was merely an outward profession.

Study of the Scriptures

Yet there was one friend (and cousin) with whom he could have profound discussions, Isaac da Costa. During his medical studies in Leiden, Abraham’s interest for religion grew stronger. Something of his youthful faith in the Almighty returned. The views of Abraham and Isaac on subjects were very similar, they couldn’t endure modern Judaism. They chose well-founded radical decisions. Therefore they studied the Bible together. In the midst of the pressure of his medical and scientific labour, Capadose was regularly overcome by doubts and depressive thoughts. At that time, his friend, da Costa read to him a letter from the poet Bilderdijk (they both attended his history classes). The letter concluded with the words, ‘Friend, be a Christian and I die content.’ From that day on both friends began attentively to examine the Word of God. Months, almost daily, they spent reading and examining the Word of God. The Gospels were part of the study and when reading Isaiah 53 they were struck by the resemblance with Christ. How often had he read this chapter? Now he couldn’t deny it, Jesus was the promised Messiah!

Neither Capadose nor da Costa told any one about their ‘discovery’. They confined themselves completely to the study of the Scriptures. All other books were laid aside, except ‘Defence of the Christian Faith’ of the former German rabbi Heydeck. More and more he was convinced that the Truth only could be found in Jesus Christ. In Him Abraham found his life, answers to his questions, yes, the Truth himself. When the change became known to his family, they first used gentle means with him, hoping these new notions might pass away, but soon they resorted to harsher treatment. This forced Abraham all the more to a public confession of his faith. On the 20th of October 1822 he was baptised in the Dutch Reformed Church of Leiden.

Isaac Ostrovsky, ‘This book is ours!’

We would love to hear how you met Yeshua. Click on contact to share your story with Jewish Testimonies.
Karl Kunert, ‘Justification is only through Jesus Christ.’ (187...