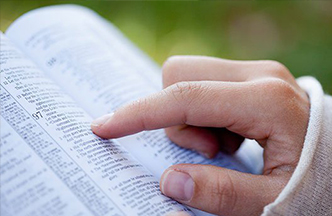 “…I know that, when my earthly life ends, I will be in a place, where there is no pain and no mourning and where the Lord will wipe away all tears from our eyes…” These are the last words of the Jewish Alexandra Chankina. On April 17th 1999, her heavenly Father took her home. She was only 32 years old and she left the following testimony behind.

Every movie, all concerts, each café…

I was born into a normal Soviet-Jewish family. I didn’t know anything about religion and I saw no need for that at all. I loved to go to the theatre or cinema. I was always restless, I wanted to see every new show, read every new magazine, attend all concerts, sit in each café of Kiev and visit new cities all the time.
One day I got hold of a magazine in which a part of the Gospel was printed. That was new for me so I had to read it. To my surprise I realized that this, contrary to all kinds of empty lectures that I had read, I really believed what I read. From that moment on I longed to have a Bible of my own.

Someone heard about my longing for my own Bible and gave me the address of a Messianic congregation in a Baltic republic. There I could apply for a Bible and it didn’t take long before I received a parcel with the Bible and a magazine, ‘Shema Yisrael’. While I read the Bible, a prayer life awakened in my heart. I felt good and was grateful for all I received from the Lord. However, I had a vague idea that He had done much more for me. Who could help me further? I decided to go with someone to the Russian Orthodox Church. After a few months of going there I realized that the Bible was not explained well or fully.

How can I change?

I came into contact with believers who took God’s Word seriously and lived accordingly. I was very happy with this, but when I took their life as an example, it made me sad. There was so much in me that was not in accordance with God’s will. How could I change that? Months of vain attempts eventually made me desperate, but then one evening a miracle happened! I started to realize that God was working out His grace in me. I repented of all that I had done wrong and realized at the same time that I had to ask for many people’s forgiveness. Among them was my former husband. When I told him about my belief and the regret that I had about all that I had done wrong, his reaction was completely different to what I expected. I was prepared that he would think I was insane. Instead he smiled, “I also got to know the Lord Jesus and joined a Messianic church,” was his answer. What a miracle!

I then started to visit the same congregation and there, for the first time, I realized that the Lord Jesus had paid for all my sins with His precious blood. Before I didn’t know any better than that all my sins would lead me straight to hell. Now I lived as a happy child of God, not that my life was a bed of roses now. I learned that His presence compensates abundantly for all the problems and hardships that we face in our life. There is only one way to enter into His glory in the future, believing that Jesus is the promised Messiah of Israel who has bought us with His blood that was shed on the altar of Golgotha.

We would love to hear how Yeshua revealed Himself to you. Click on contact to share your testimony with Jewish Testimonies.
Rose Warmer brought the Word of God in Auschwitz

Silla, ‘I was absolutely not allowed to read that Book!’
Scroll to top