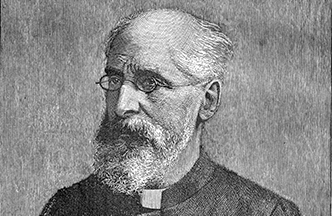 Alfred Edersheim was born in Vienna, March 7, 1825 in a well-to-do family. He grew up in the highest Jewish circles in Vienna. He spoke Latin fluently and knew Greek, German, French, Hebrew, Hungarian and Italian.
In 1847 he went to study in Budapest. His mentor introduced him to several English speaking Christian leaders in the town where he came into contact with the famous Dr. Duncan and some of his Presbyterian colleagues. Dr Duncan was a fiery Christian and a man whose knowledge about Hebrew was well-respected among the Jews. Edersheim felt very much attracted to Duncan and it didn’t take long before there were was a close friendship between them.

Depths of the Book

Through these preachers Edersheim got hold of a Brit haChadashah. Edersheim, “I had never seen a Brit haChadashah. I started reading it from the very beginning. I shall never forget the first impression of ‘The Sermon on the Mount’, nor yet the surprise and deep feeling, by which the reading of the Brit haChadashah followed. That which I had so hated was not Christianity at all but was entirely Jewish! That which I had not known and which opened such untold depths, was the teaching of Rabbi Yeshua of Nazareth.”

Edersheim found in Rabbi Yeshua his Messiah. He came under the teaching of the Ruach haKodesh and was very much impressed by the Deity of Mashiach. Trusting in His One Sacrifice and filled with the peace of God, he gave himself up to be His servant in any way it might please God to direct him.
His conversion rose great consternation among the Jewish community, but it didn’t withhold him to witness openly about his love for Rabbi Yeshua. He accepted, for example, a position to teach the students English on the condition that the Bible should be their only lesson book!

After he was baptized, he went to Edinburgh to complete his theological studies. Finally he was ordained a minister and left for some time to work amongst the Jews in Iași in Romania.
He returned and was a minister in several places in Scotland and England. He was a beloved preacher and must have been the first Hebrew Christian that was asked to preach in Westminster Abbey. In 1883 he resigned and settled in Oxford to pursue his literary and academic activities.

Edersheim wrote more than twelve large works and many important contributions in periodicals and commentaries. His works are extremely valuable from the fact that he was able to deal with his subject both from the standpoint of a learned Jew and a learned Christian. His most famous books are the unparalleled standard works ‘Life and times of Yeshua the Messiah’ and ‘The temple: its Ministry and Services as they were at the time of Yeshua Mashiach’.

The greatest glory to Christ

Later in his life he would say, “I can say a great many things in favour of the Lord Yeshua Mashiach, of His Power, Grace, and Love. But the greatest I can say of them is that He has received me. Thus, the faith of the poorest sinner brings the greatest glory to Christ.”

Louis Kinsbergen, ‘Apprehended by the Gospel’
Scroll to top