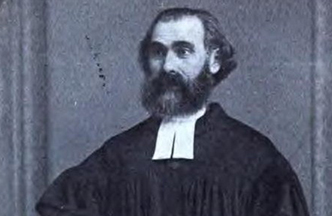 Rabbi Gurland wrote: “I have lived in two entirely different worlds, first as a Jew, and then as a Christian; first in a limited world of doubt and superstition under the fearful curse of the law; then, by the grace of God, I penetrated from darkness to light, from death to life. Since that time I have been privileged to be a messenger of the Gospel, the good news of the free and joyous grace of God in Messiah Yeshua, proclaiming the reconciliation which is in Yeshua, both to Jews and non-Jews, for I am a debtor to both.”

Chaim Gurland was born in Lithuania, where he grew up in Vilnius as the son of a zealous rabbi. He was not yet five years old when his father taught him from the Word of God. Soon he was able to read the Holy Scriptures himself. One day he saw a picture of the crucified Messiah in a biblical narrative. He was touched by it and wished to impress it on his mind. He therefore sneaked into the attic and made a copy of the picture. This took many hours and his parents went in search of him. At dusk his father, shaken and disappointed, suddenly stood beside him. In his eyes Chaim had committed a terrible crime. He rebuked his son severely and gave him a good hiding.

Doubts to the Talmud

Still Chaim was destined to become a rabbi. After three years of study he was inducted, but he saw the days of his induction as the most terrible, most unhappy day of his whole life. He had great doubts as to the divine origin of the Talmud, but in obedience to his parents, Chaim became a rabbi, knowing well that it could not satisfy him. Although his conscience troubled him greatly, he accepted the call to be rabbi.
However he could not endure it for long. In the synagogue he publicly preached against the Talmud and challenged his hearers to a discussion, but no one accepted his challenge. The Chief Rabbi demanded a revocation but Gurland refused. He remained in office for another two years, but then had to leave.

For some years he made a meager living as a private teacher. Then, one day, a Jewish peddler brought him a Hebrew New Testament in which the rabbi read for the first time the Sermon on the Mount, the epistles of Paul and other passages. His reading led to fresh doubts and great sadness came over him. His search ended with a pastor in Kishinev in Moldova, who was in contact with many Jewish people. Their acquaintance led to an agreement: Pastor Faltin would give ex-rabbi Gurland drawing lessons and German lessons if Chaim would help him to read the Bible in Hebrew.

In the course of their reading they came to the fifty-third chapter of the book of the prophet Isaiah. Although it is one of the most wonderful portions of the Bible, this chapter is never read in the synagogue. Gurland therefore asked Pastor Faltin not to read it. Pastor Faltin said patiently: “I shall pray that God may give you courage to be willing to know His saving truth.” From that time the rabbi could not help thinking about that remarkable chapter, and felt it was cowardly to be afraid to know what God had revealed in it. At their following meeting Rabbi Gurland expressed his willingness to read the fifty-third chapter with him. But first of all the pastor read to him the story of Christ’s sufferings as contained in the New Testament. When they read then the 53rd chapter of Isaiah, Rabbi Gurland had to admit that the chapter was a perfect picture of what Jesus had suffered at Calvary.

Together they read the Holy Scripture regularly and eventually Chaim Gurland desired to confess the Lord Jesus Christ in immersion. The excitement and indignation of the Jewish population was terrible, when they heard about this intention. They even threatened him with the death if they dared to go through with it.
When pastor Faltin asked the rabbi whether he would not prefer to be baptized quietly in the manse he answered without hesitating, “No, Jesus the Messiah is a living, mighty Saviour. He can protect me; but even if He does not, I am willing to suffer and die for Him.”
When the day of the rabbi’s baptism arrived, the church was overcrowded with both Christians and Jews. The minister preached about the Messiah who came to seek and to save that which was lost. Before the baptism, Gurland gave a short address, in which he stated how he received the heavenly light through reading the fifty-third chapter of Isaiah, and that he believed Jesus of Nazareth to be the promised Messiah and Saviour. The Lord himself had calmed the raging hearts and during the act of baptism and the rest of the service everything was quiet.

Called to his own people

To his joy the Lord called Chaim, or Rudolf Hermann as he was called since the day of his baptism, to go out as a missionary to his own people. He showed many Jewish people the way of salvation and led many Jewish brothers to see that the Lord Jesus is the Messiah. Also he spoke in many churches about the work of the Lord amongst the Jewish people. He was able to sow love for the Jews and for work amongst them in the hearts of many Christians.

Bernie Tosdevin, ‘I am Jewish, I don’t study the New Testament’

We would love to hear how you met Yeshua. Click on contact to share your story with Jewish Testimonies.
Rabbi Chil Slostovsky found a spring of fresh, cool water

Rose Price, ‘That Jew died for you’
Scroll to top