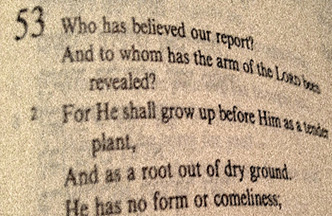 Solomon Deutsch was born in Hungary. In the orthodox Jewish environment in which he grew up, it was obvious that he would give all his attention to studying the Talmud. He married very young, as was the custom in that time and he moved in with his father-in-law. Board and lodging were taken care of and Solomon could devote himself more deeply to the study of the Jewish Scriptures. However, the more he knew about the Talmud, the more he realised that he neglected the Word of God itself. His conscience troubled him and he decided to improve his life.

When his interest reached further than just the Tenach (Old Testament), the New Testament started to fascinate him extremely and this did not go unnoticed. The rabbi was alerted and he was very disturbed, ordering Solomon to divorce his wife or to speak out against this ‘Christian heresy’. On the other hand priests from the church came to try to convince him to join them. Solomon saw only one escape. Praying for God’s guidance, he left in 1762 for Prague and on the way he studied the Scriptures daily. By the time he reached Dresden he had begun to read Isaiah 53 for the first time. This passage was a great mystery for him.

About whom is Isaiah speaking?

He visited a local rabbi to find an answer to the burning question, “About whom is the prophet Isaiah speaking here?” The rabbi made an appointment with Solomon to discuss this chapter with him in private. He was astonished when the rabbi told him honestly that he believed that Jesus of Nazareth had fulfilled this prophecy. Then Solomon went to Leipzig, Berlin, Amsterdam and London looking further for the truth. In 1763 after his recovery from a serious illness, Solomon decided to return to Holland. On his way by ship to Arnhem, he met a Swiss Christian and in the conversations that followed, his eyes were opened further to Jesus, the Messiah of Israel.

Solomon was baptized in Amsterdam on June 25th 1767, after he handed in a written confession of his faith, ‘Jehovah glorified through the acknowledgment of the true Messiah, Jesus Christ, proved from the writings of the Prophets, Evangelists, and Apostles.’ This booklet of 175 pages was followed later by a work of his hand in three volumes ‘Israel’s redemption and eternal salvation’ (Israel’s Verlosinge en eeuwige Behoudenis). Christian Deutsch, as he wanted to be called, decided to study theology. He stayed in Holland to serve his Lord and became a pastor and until his death in 1797, he laboured faithfully in Mijdrecht and preached full of love the salvation in Christ.

Silla, 'I was absolutely not allowed to read that Book!'

We would love to hear how Yeshua revealed Himself to you. Click on contact to share your testimony with Jewish Testimonies.
Ridley Hayim Hershell, ‘Blessed are they that mourn’ (1807-1864...