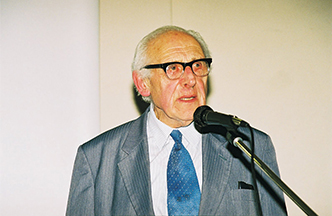 I was only two years old when I ended up in a strongly orthodox Jewish orphanage. When I was 11 something happened which left a mark on the rest of my life. One day, on my way back to the orphanage from school, some children threw stones at me and the other children from the orphanage and yelled, “You have crucified Jesus!” This happened often and it was increasing.
However, one time when this happened an old lady called to us, “Don’t run away, I want to tell you something… my best friend is a Jew!” “But you are not a Jew?” we asked suspiciously, “Who is then your great Jewish friend?” “Jesus,” she replied. “Jesus?” we called out in disgust, “O, but we don’t want to have anything to do with him. We are Jews and will remain Jews!” The head of the orphanage made it very clear, “Never speak to anyone who talks about Jesus”.

Over the years I had many conversations with a friend who was a Christian and things slowly became clear to me. The antipathy to the Gospel disappeared and at the age of 18 I came to believe in the Messiah. The reaction when people found out was, “Oh, he’ll soon get over that,” but happily, that never happened, quite the contrary! I, as a Jew, had received pardon and had found a new life through the Messiah. I thought to myself that my people must also get to know this, so for three years I studied at All Nations Bible College. I thought that I was the only Jewish believer in the world. I loved my Christian brothers and sisters, but where were my own people? Then an older Jewish brother took me one Saturday to a meeting where I met no less than 90 Jewish believers. It turned out to be a meeting of the International Hebrew Christian Alliance. One day I had to appear before the directors of the mission, “We have been praying for about five years that the Lord would send us a young Jewish believer who could explain to the Churches the meaning of Roman 1:16: “For I am not ashamed of the Gospel of Christ: for it is the power of God unto salvation to everyone that believeth; to the Jew first, and also to the Greek.” I got down on my knees and prayed, “Lord, I don’t really want this, but if is Your will … here I am” (Ernest was, at that time, 21 years old). Shortly after that I was appointed secretary of the mission.

After the war we decided to work as a mission in South Africa, where about 110,000 Jews had sought asylum, but also in Australia, Canada and New Zealand. I was given the leadership, which meant that I was sometimes away from home for months.

Until his death, Ernest Lloyd had but one desire, to lead his people to the Messiah of Israel!

We would love to hear how Yeshua revealed Himself to you. Click on contact to share your testimony with Jewish Testimonies.
Daniel Rozen, from hate to love, a testimony from Zion