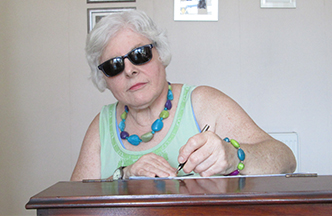 I have been a Jewish believer in Yeshua for almost twenty years. I was the only child of older parents. My mother’s family has lived in Liverpool since the middle of the 19th century. My father was a Polish Jew who came to England at the end of the Second World War. He was the only one who survived out of his whole family. My grandma, who I was named after, died in Treblinka concentration camp along with three older sisters of my father, their husbands and their children. My grandpa had died when my dad was a small boy.

My parents married in 1947 in Fairfield Synagogue, Liverpool. My mother kept a kosher home. We celebrated all the festivals, especially Shabbat and we went to shul every week. Everyone I knew was Jewish. My mother was one of nine children, so growing up I had many cousins to play with. From a young age I knew the goyim where different from us. My father said, “Mine kinder, sooner or later the goyim will stab you in the back.” We knew to keep one hand free to carry a suitcase, in case we had to move yet again.

I knew from when I was quite small that Jesus was our Messiah, but because I am Jewish I knew He was not for us. We believe in one G-D, but the goyim believe in three gods.
We belonged to an orthodox synagogue where I always sat upstairs with my mum in the ladies’ gallery. I remember one day in this synagogue. I remember, even now, going downstairs where the men sat. It was Sukkot and we were all heading outside to eat in the Sukkah. Someone, I did not know who, said, “We are waiting for the Messiah.” I said, “He has already been.” I remember someone smacked me so I never said anything else about the Messiah for a long, long time.

I lost my faith after my beloved mum died after a long battle with cancer. She died only weeks before I got married to Peter in 1975. Peter was a gentile and he, like me, was not so keen on religion. He’d been brought up in the Church of England. Peter’s family put a Christmas tree up and had fish on Good Friday. I had promised my mum before she died that I would bring up our children Jewish and my husband did not mind this. We had our first child, Brian, in September of 1976 and our daughter Deborah in April of 1978. Brian had his Bar Mitzvah when he was thirteen.

By 1996 our marriage was breaking down. My oldest friend Hilary came to see me. She is a Liverpool girl who had lived in Eastbourne, East Sussex for many years. She got the train back to Liverpool to come and see me. She told me she had become a Christian. “Don’t be daft, you have always been one,” I said. I had no idea what she was talking about. This was towards the end of 1996. Then a lady called Margaret wrote to me. Margaret also lived in Eastbourne and was a friend of Hilary. She sent me her testimony, before I even knew what a testimony was. Margaret also put me in touch with Christian Witness to Israel. She gave me a number to call, but it was up to me if I called.

Not the only Jew

I read and re-read Margaret’s letter many times. I eventually phoned someone I didn’t know at all. I spoke with a lovely lady called Elizabeth. I said, “My name is Estelle and I believe in Jesus.” I felt that I was the only Jew to believe Jesus was our promised Messiah. She told me I was not the only one. It felt so good to hear this. Elizabeth told me she would come and see me. She lived in Nantwich, Cheshire, a two-hour drive to Liverpool. Then I was put in touch with a wonderful Christian couple who said they where messianic Christians. They gave me my first complete Bible, just in case I was conned I decided to read my own Jewish Bible first. I had gone to a Jewish school, but had not ever opened this Bible. So I read my Bible first. Then I read the complete Bible starting from Genesis. When I came to the Brit Hadashah, the New Testament, the words came alive.

No life without Him

I was reading about our Jewish Messiah. His name is Yeshua, He is Jewish and He was born Jewish and died Jewish. He was not a blond blue-eyed English man, as I was always led to believe. I would like to say that my husband and I got back together after a two-year break. We had both come to faith separately, thank you Lord! We will be celebrating our 40th wedding anniversary, later this year.
Yeshua is not just a part of my life, without Him I’d have no life.

We would love to hear how Yeshua revealed Himself to you. Click on contact to share your testimony with Jewish Testimonies.
Louis Goldberg searched for forgiveness of sins (1923-2002)

Joan Schumacher, ‘He has set me free!’
Scroll to top