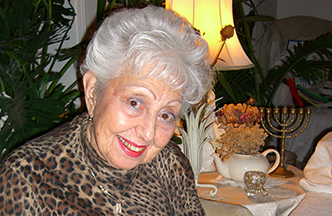 Frieda Roos van Hessen, a gifted singer with a promising future, became a fugitive after the Nazi invasion in Holland. She escaped the violence against the Jewish people by hiding in several places. After the war she discovered the terrible truth, her whole family was killed in concentration camps. She found inner healing by the love of her Messiah.

I was born and raised in Amsterdam, my Jewish parents never talked about God and I had never been in a synagogue except for my brother’s wedding. For me, Yom Kippur meant a day off from school and today I know and believe that my father and mother themselves never knew what it meant. They, like so many of us, were “seeing blind and hearing deaf” as the Prophet Isaiah foretold. The only Jewish events that took place in our home were the Bar Mitzvahs of my two brothers! However, we considered ourselves very Jewish.

Entering into my teenage years I had a Gentile boyfriend who was Catholic, though not a practicing one and we often went to Catholic Church together. I was always impressed by the paintings of the seven stations of the crucifixion and moved by the sadness expressed in the face of Christ, as the artist perceived the magnitude of that event. The teenage years of my life soon became very eventful and tragic when I became a fugitive, running for my very life.

The Lord blessed me with a soprano singing voice and after studying at the Amsterdam Conservatory and being still very young, I embarked on a career that led me to sing the Dutch version of Disney’s Snow White. I proceeded to the Grand Diploma in the Geneva, Switzerland World Contest, to the role of the Forestbird in Wagner’s Siegfried with the Bayreuth Festspiel Haus, a Command performance of Verdi’s Requiem for the Queen of Holland. I performed at many live broadcasts and concert performances, including oratorios like Handel’s “Messiah,” and the many beautiful Christian cantatas by Bach in church performances.

An abrupt ending by the Nazis

The Second World War came, abruptly ending my singing career. During the next five years I lost all I ever had, my entire family, home and belongings. I had to run from death and destruction, never knowing what the next day would bring, whether I would live or not. I was immediately disqualified from all regular concert performances, the reason given was because I was Jewish and it was therefore not worth reviewing this soloist. The Germans allowed a temporary Jewish Theatre, so I became involved in performing with famous German Jewish refugee artists for the Jewish population. Meanwhile, the Nazis brought Jews that they had rounded up in “razziahs” for deportations to the infamous concentration camps to another theatre in the next block. As a result of my involvement with the Jewish Council, I was allowed, along with other Jewish council members, to minister to the thousands of deportees and we were guaranteed that we would be the last ones to go. The deportation theatre had become a madhouse of anguish and filth, housing up to 9,000 people a night in a place built to seat 1,000. Sick people, old and young, were huddled together in fear of death, sleeping on lice-infested mattresses all over the floor and children were screaming. There were only two toilet facilities. I finally contracted scabies all over my body and lice, so much so, that when an opportunity did present itself for me to go into hiding, I could not because of my condition.

An unknown world of fear, hiding and agony

In the theatre I had met a dancer whose sister, Henny, became my friend. The Gestapo had arrested her husband and we decided that I would stay in her house and help with her two small children. My former boyfriend, unbeknown to me, had become a Gestapo agent out of anger against my parents, who had forbidden our courtship because he was a Gentile. Not only did he try to destroy the Jewish people, but he also sent the storm troopers after me at Henny’s place. They came at night, shot through the house, but failed to find us. We hid in a heavy steel dumbwaiter. The storm troopers left, planning to return in the morning. This afforded us a couple of hours to escape over the roofs of our four-story house and the neighboring buildings in the dark of night.

So we entered an unknown world of escape, fear, hiding, and agony. For the next four years we were hiding out in many towns and cities. The longest time in one hideout was 212 days in one room. The only time we went out was in the dark to be with my parents by crawling over the ground in the dark. They were hiding in the next house until the woman who was hiding us betrayed them for 25 guilders each. That was the price paid by the Nazis to anyone for information about Jews in hiding or anti-Germans listening to English radio broadcasts about the progress of the Allied forces. I saw my dear parents rounded up and taken away with bayonets in their backs. They and my lovely younger brother, who was betrayed some time later, were all murdered in concentration camps.

The only thing my brother Eddie had taken with him was his violin, which he had played professionally. He was forced to play it while our people were being tormented and gassed. After the war I met a doctor who had survived, and who told me about how the Germans kept Eddie without any medication as he suffered from typhoid and starvation. May God help them!

It takes the love of Jesus to enable us to overcome and to want to forgive. To say, “Father forgive them, for they know not what they do.” We forgive, He heals the wounds, but the scars remain. Space does not afford to account here for all that happened. I can only say that our God was in complete control and saw me through even when I was held prisoner after having been arrested with a bayonet in my own back. God was there, He set me free right out of the “lion’s den,” forcing them to let me go in a most miraculous way. When it seemed to us that our trials would never finish, finally the war came to an end.

Suddenly, from all different directions people started to talk to me about Jesus. Then, at last I contacted a pastor who sent, believe it or not, a German lady to me. God does have a way with things! She had married an Orthodox Jewish man and lived a Jewish life for 33 years. Her husband died suddenly leaving her brokenhearted and grieving and it was then the Lord spoke to her and she was born again.

For the next six weeks I argued with her until she asked me to read Isaiah 53 and Psalm 22. I began reading Isaiah 53 but I did not understand a single word. Then, as promised, I started reading Psalm 22, and coming to the 16th verse where it says “…they pierced my hands and my feet…” I let out one big yell, “Oh my! That is Jesus, because He was crucified!” I remembered all the Christian paintings I had seen years earlier in that church in Amsterdam. Suddenly all of it made sense. I went back to the 53rd chapter of Isaiah and I understood each and every word. Hallelujah! The ‘scales fell off my eyes’ instantly, and the first thing I said was, “It’s like coming out of a dark hole into the light.” At that point I did not know that Jesus is called ‘The Light of the World.’ I was born again all alone in a room, by reading the Old Testament and Jesus revealing Himself to me there. Then reading through the Gospels I understood even more.

Since those earlier days, God has not only furthered my concert career in the ‘New World’ but also enabled me to become a living testimony for Yeshua ha Mashiach (Jesus). Now, many years later, having been recently in Israel visiting the places where Yeshua walked and preached, the Word has become even dearer to me.

God has called Frieda into different ministries, such as volunteering in a maximum security prison for twenty years as a counselor and music director during church services in the prisons. She has conducted her own chapel services for years in one of the major nursing homes in Charlotte, North Carolina. Today she continues to serve the Lord, counseling and giving her personal testimony in the United States and abroad. Frieda was asked by Director Steven Spielberg to add her testimony of survival to the Shoah (Holocaust) Project, as well as the Holocaust Museum in Washington D.C. and Jerusalem, and was able to add into the permanent record her faith in Yeshua as Messiah.

Zvi Kalisher, 'Was it God who was with us?'

Karol Joseph, 'Because of my fears I was always afraid'

We would love to hear how Yeshua revealed Himself to you. Click on contact to share your testimony with Jewish Testimonies.
Grandma Bessie, never wanted to have anything with Yeshua

Gideon Levytam, ‘How I found the Messiah of Israel’
Scroll to top