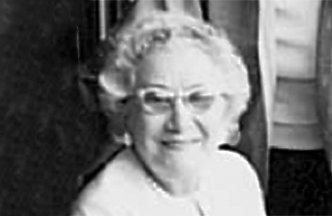 Grandma Bessie never wanted to have anything to do with the person of Yeshua for as long as I could remember. Whenever I would try to broach the subject, she would flick the back of her hand in the air to indicate her disinterest. She refused even to pronounce the name, “Yeshua.” It was a painful memory to her and so many of our people who sustained hurt, humiliation, rejection and even death from those who named Yeshua as their God and motivator.

Yeshua and the nursing

When Grandma was put in a nursing care facility it had nothing to do with her wits, but rather the frailty of her aging body. One October morning, I went there for an early visit. Rarely would I bring my Bible to visit her because she had made it so clear, so often, that she was not interested in hearing anything from the Bible. Nevertheless, I brought it in that day.

I began speaking to the charge nurse assigned to Grandma Bessie’s floor. She wanted to know what I did for a living and I told her I worked with Jews for Jesus. She was thrilled, since she, too, was a believer in Yeshua. We spoke about eternal things as I approached Grandma’s room. As soon as I walked in the door, Grandma greeted me with, “What was it you were talking about just now?” Matter-of-factly I answered, “We were talking about the forgiveness of sins that Yeshua offers and the eternal life that He brings.” “I would like to hear more about that,” she announced. My jaw nearly hit the ground! With surprise and delight, I opened the Bible and began reading to her. I could almost see something going on in her heart and mind as she listened. After 30 minutes of conversation, I asked Grandma, “Would you like to accept God’s forgiveness through Yeshua now?” And at the age of 96, she did! The peace and joy that flooded her soul were evident. Her eyes lit up and her face shone. She continued to shine for five more years, until at the age of 101, she left this earth and went to meet her Messiah face to face.

If you want to know the truth about Yeshua, it doesn’t matter if you are young, old or in-between. Please ask God to tell you what is real.

Nathan Scharf, ‘I came to Jesus as a sinner’

We would love to hear how you met Yeshua. Click on contact to share your story with Jewish Testimonies.
Vera Schlamm, from the Holocaust to the Messiah (1923-2008)

Frieda Roos, in the shadow of the Nazis
Scroll to top