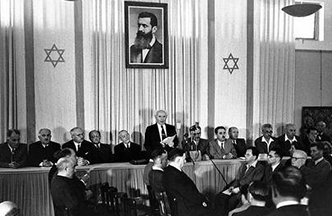 Isaac Solomon Ostrovsky was born in 1902 in Tagancha, a town not far from Kiev in Ukraine. He grew up in a traditional Jewish family, was eager to learn at school and was among the best pupils. After 1917 however, anti-Semitism had risen to gruesome proportions. He survived the pogroms, but saw, as a teenager, his father being murdered. The young Solomon was dismayed, “Why? Why? Why?” he cried out to God. At the same time he pledged to avenge his father’s death in the future, “Even if it would cost my life!”

In those days, the ideas of Theodor Herzl had just started to penetrate the Russian Jewish community. The desire for a Jewish homeland ‘pulled’ and the rising anti-Semitism ‘pushed’, so many Jewish families decided to leave Ukraine. The remainder of Solomon’s family was one of those families who decided to leave. Together they planned to buy land in Palestine from the Turks to start building a new future there.

On their journey, the family stayed in Romania with many other refugees waiting for opportunities to travel further. They stayed nine months in the country town of Kishinev. One day Solomon received an invitation to an evangelistic meeting. His friends laughed about it, but Solomon firmly intended to go. Whilst in Russia, he read a booklet by Tolstoy about Jesus’ Sermon on the Mount. When he read the words, “Love your enemies,” it was more then he could take. He still hated the murderer of his father, how would he ever be able to forgive him?! That was superhuman. That Christ of Tolstoy surely was superhuman, but actually he liked Him. Through this invitation, Solomon came into contact with a Messianic Jew, Leon Averbuch. From him he received a Russian New Testament and could not wait to start to read this new treasure.

“This book is ours!”

Every free moment Solomon read the New Testament, he couldn’t get enough of it. He started with the genealogies in Matthew and only saw familiar, Jewish names. He realised, “This is not a Gentile book, this is ours!” He kept on reading the New Testament and enjoyed it. Every Sabbath he went to the house of pastor Averbuch and took part in the Bible study together with other Jewish men. Gradually Solomon started to see that Yeshua was not only a great teacher, but that He really was superhuman. He had to be God Himself!

After three months of reading and studying, he wished for nothing better than believing in this wonderful Christ. However, at the same time, he knew what it would cost him as a Jewish boy. He would have to pay a very high price. When Solomon told Averbuch about his struggle, Averbuch simply proposed, “Let’s pray.” Solomon knelt down and prayed from the bottom of his heart. He thanked God that He sent His Son to be his Saviour. At the same moment he received a deep, inner peace and was speechless for hours overwhelmed by God’s goodness.

Baptism in the Danube

Romania was afraid that the communists would infiltrate into the Russian refugees. So Solomon and the family had to move away from the border region and they ended up in the port of Galatz. Although they led a life of refugees, they were grateful that they didn’t have to fear the threat of Russia anymore.
Solomon immediately went in search of fellow Yeshua believers and found some at a small Norwegian Lutheran mission post. Every Saturday evening he could be found in that little piece of ‘heaven on earth’. One day Solomon’s ‘spiritual father’, Leon Averbuch, came from Kishinev to Galatz and it was on this occasion that the young Solomon Ostrovsky was baptized in the Danube on May 6th 1922.

Solomon travelled to Palestine with a cargo ship full of refugees. He devoted his whole life to preaching the gospel to his people in England, Romania and Israel. He and his wife, Sarah, have known many hardships because of poverty, opposition and wars, but they put their trust in all this fully on the Lord. Once his brother invited him to come to America, telling him that he would like to provide everything that he and his family would need, on condition that he would not speak a word about his Christian faith. Deeply touched Solomon replied, “Thank you very much, but I cannot do what you ask. My faith is too precious. As long as God provides me with bread, water and a little salt, I will keep preaching the Gospel.”

He died at the age of 98, in Canada. God has blessed him very much and used him in the service for His people.

Alexei, ‘The real meaning of life’

We would love to hear how you met Yeshua. Click on contact to share your story with Jewish Testimonies.
Erich Weinmann, ‘About whom is Zachariah speaking?’ (1921-2012)

Jacob Gartenhaus, ‘I would rather die than renounce Him’ (1896-...
Scroll to top