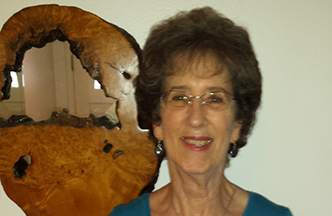 I never cease to be exhilarated about being part of the fulfillment of the Law. Because Yeshua fulfilled the Law, I partake in that completion by repentance of my sin, and by faith in Him. Despite being told lies about Yeshua and the Bible for the first 32 years of my life, the Holy Spirit covered me and drew me to faith. The Law convicted me of my sin, showing how I fall short of His moral perfection. In godly sorrow I repented of my sin against Almighty God and put my faith and trust in Yeshua HaMashiach, in His impeccable fulfillment of messianic prophecy, in His finished work on the cross and His victorious resurrection.

As a child I attended a conservative synagogue in a suburb of Los Angeles. Our family practiced religion nominally and did not have a personal, reverent relationship with God. I went to Sunday school weekly for a while and attended one year of Hebrew school. My two older brothers had bar mitzvahs, but my sister and I did not have a bat mitzvah. After the bar mitzvahs, our family rarely went to services. As a teen, I once attended a service at the synagogue because I was searching for God, but I didn’t experience Him there. For my parents, the Bible was not alive. They didn’t pray, except for parroting a little of the Seder Haggadah prayers. They wavered between saying Yeshua was at best a good man but if a Jew were to believe in Him that would be most terrible, and that would nullify her being Jewish. They seemed to link Him to horrors like the Holocaust. Ironically such evils were actually against Jesus because ‘Salvation is of the Jews’. Evil has and is always trying to stop the Son of David.

Crying out to God

I remember how I used to dream sometimes about God as a child, with His voice calling me. However, the deception about Him and Yeshua worked against my being saved until I was an adult. I was told, for example, that there is no such thing as original or personal sin, and that when we die that is the end with no judgment, hell, or heaven. Sometimes I was told that ‘good’ people go to heaven, but of course that was a man-created ‘heaven’. As a teen and young adult much of my life was very difficult, yet God protected me a number of times, including from physical harm. I finally got very broken emotionally and physically at the age of 32 and kept crying for help. In my way I was calling for God and it was not the first time I called for Him. There had been other times when I would write or pray to God. At about age 29, for example, I told Him that He would be first in my life. This was without really understanding the First Commandment, so this was the Holy Spirit working in me.

At 32, when I was suffering a lot again, I met a pastor’s wife who quietly tried to talk about Him to me. One of the things she said was that through Him I could have peace despite my circumstances. That was a balm to my spirit. I had a heart shift which led me to begin reading the Bible and opening up to Him. The Word became alive to me, with the Holy Spirit as my teacher. One of the things I learned is that peace is a fruit of salvation. I began loving Yeshua, and my love and gratitude keeps deepening and expanding. I had to learn, however, that He died for my sin and my breaking of His Law, my violations against His beautiful holiness. Then I really started to understand and appreciate His unfathomably great, sacrificial love for me.

After being saved I wanted to obey His Law, not as a religion but as a profound act of gratitude towards Him Who alone offers perfect, wonderful love. Jesus is indeed ‘all the world to me’. I love obeying the Great Commission in my daily life. Of course I have difficulties and blessings in this life, but they pale in importance next to His love.
Ever faithful, He is always with me. Isa. 43:1-3, “But now, thus says the LORD, who created you, O Jacob, And He who formed you, O Israel: ‘Fear not, for I have redeemed you; I have called you by your name; You are Mine. When you pass through the waters, I will be with you; And through the rivers, they shall not overflow you. When you walk through the fire, you shall not be burned, Nor shall the flame scorch you. For I am the LORD your God, The Holy One of Israel, your Saviour;’”

Now I love Him and am not enslaved to the world anymore, except loving the people in it, especially their eternal souls. I have a huge desire that everyone would be saved. I love using the Law to help reach people’s conscience, like happened to me and like happened to people in the Bible. When we are thus convicted, then we are ready for the remedy of Grace! We need to be vigilant against the devil, the world, the flesh, and self. The truth is that Yeshua is the verifiable fulfillment of Judaism’s prophecies. So when we repent of sin and have faith in Him we become completed as Jews.

We would love to hear how you met Yeshua. Click on contact to share your story with Jewish Testimonies.
Estelle Stewart, ‘Without Him I would have no life’