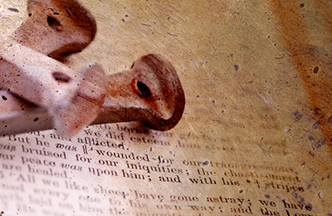 John Moses Levi was born as the son of a Prussian couple. Soon after his birth his father died and his mother, now a young widow, was supported in his upbringing by her father, rabbi Benjamin Eppstein. When he was nine years old, he left with his grandpa for Jerusalem. The old rabbi adopted him as his son and gave him his name Eppstein.

Study of the Talmud

Learning Hebrew and studying the Talmud were his passion and when several of his friends came to believe in Jesus Christ, he became more fanatic. At the age of sixteen he even went about with a dagger, determined to kill his cousin Lauria. Lauria, who was a rabbi, received Jesus Christ as his Saviour and God used him to get John to read the Prophets and eventually, the New Testament.

His eyes opened to the truth that Jesus of Nazareth had to be the promised Messiah. John put the Talmud aside and threw himself on the Word of God, the Old Testament as well as the New. In his own words, “My convictions deepened daily. I longed to openly confess the Lord Jesus, but I didn’t have the courage to give up all for Him.”

At the local synagogue he was the only Levite, so it was his duty to read from the Torah.
As he was going up to the desk his sash caught and the tracts that were hidden in it fell out on the ground. When the bystanders saw the tracts, they yelled to him, “Apostate! How dare you desecrate this place! Were you going to read the Torah like that?!” The whole congregation began beating him and he narrowly escaped being murdered.

John fled, gave his life into the hands of the Lord and found a safe place in the house of Christian brothers. On July 13, 1844 he was baptized. He stayed for some years in Cairo and then went to Malta where he studied theology for five years. His first post as a missionary was Baghdad and after that he worked from 1867 until 1885 in Smyrna, where many Jews were born again. During his missionary career he baptized more than 260 Jews.

John Moses Eppstein had friends amongst the rich as well as the poor. People looked up to him for his linguistic talent (he spoke fourteen languages!) and his great knowledge of the Bible as well as the Talmud. Shortly before his death he said, “I am the happiest man in the world,” and “I thank God that He enabled me to find the Pearl (Christ Jesus) and to lay hold of it with both my hands.”

Rivkah, ‘I found the Jewish Messiah in communistic Romania’

We would love to hear how you met Yeshua. Click on contact to share your story with Jewish Testimonies.
John Henry Brühl studied the book Isaiah (1823-1893)