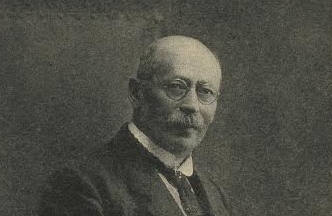 The Russian born Joseph Zalman fled to the west and waited in Amsterdam for a ship to America. He ended up in a meeting where the Name of Jesus was mentioned. He was outraged, but also fascinated. In time he discovered, in a miraculous way, that He also is his personal Saviour.

Joseph Zalman was born in 1860 in Turkey into a strict Chassidic family. Shortly after his birth his mother died, so he was raised by his grandmother. When he was twelve, his father remarried and they moved to Odessa in Russia. While they were there, ‘Christian’ Cossacks killed his younger brother in a pogrom and from then on he hated the Christians intensely. After some time they overcame this strike and they even prospered a little. His Father made name as a builder and architect and Joseph followed in his footsteps and co-operated with him as a building architect.

Joseph married in 1883, but the young couple had a hard time. There were building orders, but the anti-Semitism was rising more and more. In addition, the government charged extra high taxes on Jews so many Jewish traders were forced to leave. Joseph planned to immigrate with his wife to America, so with little money in their pocket they took leave of their parents and family.

They took the train for the long journey west. In their carriage sat a young man who was completely fascinated with reading a book. He acted very mysteriously until Joseph could no longer suppress his curiosity and said “Show it to me.” To his surprise it was a New Testament, forbidden reading for Jews. The man was travelling to London to be baptised and to become a preacher. When the man had to change trains, he gave the New Testament to Joseph, who started to read in it immediately. Some time later his wife noticed what kind of book it was, “What? Do you want to become an apostate now too?” she said angrily. She snatched it out of his hand and threw it out of the window.

They travelled further to the Netherlands and ended up in Amsterdam. One Sunday morning Joseph walked into town and heard music. He thought it came from a teashop, as there are many in Russia. He opened the door and noticed immediately his mistake. He saw someone in the pulpit that looked a bit like a Jew. However, it was not a synagogue because the women and men sat mixed up. There was no orchestra but an organ. It was also no church, because he didn’t see icons or images of saints. When he wanted to leave, a man showed him a seat. Bewildered he looked around and listened to the foreign sounds of the preacher. Suddenly he heard the Name of Him. Outraged and filled with hate he spat on the ground as he now knew that he found himself in a Christian meeting. Nevertheless it fascinated him enormously and after the service he was brought to Reverend Adler, a missionary preacher from London. The evangelist spoke with him as a friend and won his sympathy. His compassion made Joseph tell him all his concerns.

Study of the Word

The boat to America left without them because Joseph became interested in the Word of God. Reverend Adler provided for their cost of living and later he found regular work for Joseph. This enabled them to continue the study of the Scriptures that finally led to a total surrender to their Messiah and a baptism of the couple on Ascension Day. The Jewish community flew into a rage. Zalman survived a barrage of questions from the Jewish council and didn’t give in to the temptation of a large sum of money. Subsequently he was attacked physically and battered. Finally, they convinced his wife that his religious conviction was wrong and, under pressure, she left him.

Joseph then left on a ship to Java in the hope to find work there. The daily struggle to earn a living burdened him heavily, but when a cholera-epidemic broke out on board, fear grasped him. Was he prepared to face God? Never before was he so deeply aware of his sins and then came the most decisive moment in his life. The Spirit of God revealed to him that the Messiah is not only the Promised to the fathers, but also his own Saviour. In the lower part of the boat, between the coals, he was filled with joy and cried out, “Lord, what do you want me to do?”

Preacher of the Jewish Messiah

He returned to Holland and reverend Adler asked him to become his assistant in the growing mission work and on the 1st of December Joseph Zalman started work at the London Society. Day in day out he cycled through the cities and villages in the Netherlands and Belgium. In 1901, he opened the house Elim in Rotterdam where many immigrating Jews found shelter. They received food, clothes and medical care and Joseph opened factories to provide in work. Above all that, he gave them spiritual food and a place to study of the Scriptures. Joseph worked in the full conviction that God did not cast off his people, which he foreknew (Romans 11:2).