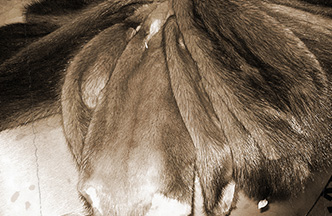 On April 16th 1816 Simon and Zipporah Bloch became the proud parents of a son, Julius Paul. The orthodox Jewish couple had a reason to be so proud of their son, even before his Bar Mitzvah (13-years old) he had gained a thorough knowledge of the Talmud.

When he was fourteen, he became an apprentice to a furrier and thus earned his living. It was in this time, that he first heard about Christian missionaries. When they visited Jutroschin (in Prussia), a stronghold of Judaism, Julius was one of the first to pelt them with stones. Such goyim were not welcome in his town! As a skilled furrier, he found employment with a Mr. Albert, a respectable furrier and … Christian. The young Bloch tried to turn a deaf ear to the peace and quiet that he noticed in the family of his employer. Julius was going downhill, he was lonely and unhappy and couldn’t say the Hebrew prayers anymore as before and he didn’t find consolation in the Jewish ceremonies of his youth.

Bloch got a Bible and began to read it out of curiosity, but when his conscience was awakened by the Word, he put the Bible away and determined to remain a ‘good Jew’. He tried to comfort himself that he had always lived a blameless life… in vain! His conscience accused him and at last his despair nearly drove him to commit suicide. By God’s grace he was prevented from doing something to himself. He went down on his knees and gave his life into God’s hand and came to know Jesus Christ as his Saviour and Redeemer.

Rejected and cast out

When he openly confessed his newly found faith to his Jewish friends, he received much opposition. They bombarded him with counter-arguments, threatened him or tried to win him over by offering attractive business deals. His once so proud parents were at a complete loss. Julius was rejected and cast out by the whole Jewish community so he took refuge in Berlin, where fellow believers temporarily received him.

Although nothing could lead him to give up his belief in the Messiah, he kept on fleeing from those who saw him as a traitor of Judaism. He fled to Amsterdam. There he came into contact with Mr. Pauli, who asked him to assist in his mission to tell the Jewish people the Gospel. From 1843 on until his passing away in 1900, Julius reached many Jews with the Good News. Many were baptised by him in the name of the Son of God, Yeshua Ha Mashiach.

We would love to hear how you met Yeshua. Click on contact to share your story with Jewish Testimonies.
John Moses Eppstein, studying the Talmud was his passion (1827-1903)

Patrick couldn’t do anything without drugs
Scroll to top