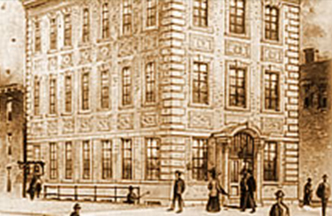 Leopold Cohn was a promising young rabbi, who was willing to give up everything for the sake of the truth. He was a great scholar and preacher, a faithful shepherd and a zealous missionary.

In 1869, Leopold was orphaned at the young age of seven and had to learn to take care of himself. He had a difficult childhood, but it was during this time he learned to put his trust completely in God. At the age of thirteen he decided to become a rabbi and five years later he was ordained. His zealous study of the Talmud as well as the Tanakh (the Hebrew Old Testament) confused him. In the book of Daniel (9:20-25) he discovered that the coming of the Messiah should have taken place 400 years after Daniel received his prophecy. The young rabbi started questioning the reliability of the Talmud.

How difficult it was for rabbi Cohn, he had to make a choice. Believe the Word of God or close his eyes to the truth. In the midst of this conflict one prayer was continuously on his lips, ‘Open thou mine eyes, that I may behold wondrous things out of thy law.’ Psalm 119:18
A crisis followed. When he asked advice from an older, ‘wiser’ rabbi, the rabbi began to lash out at him with his tongue, “You aim to uncover the Inscrutable … you have the temerity to question the Talmud … you talk as an apostate!” Disappointed and broken, rabbi Cohn took his leave. He placed all his hope in America, the nation of freedom.

End of his quest

In March 1892 he set foot in New York. Almost straight away he came across a Messianic church where a Hebrew sign announced ‘Meetings for Jews’. His curiosity brought him into contact with the rabbi, a Jewish believer in Jesus Messiah. When he noticed that Leopold didn’t know the New Testament at all, he gave him a copy in Hebrew. The first lines that he read touched him deeply ‘The book of the generation of Jesus Christ, the son of David, the son of Abraham’ Matthew 1:1. His quest had come to an end. God had answered his prayers. It was more than clear, the Messiah’s name is Yeshua, He was born in Bethlehem and came exactly at the time, prophesied by Daniel. His joy was unbounded but also times of sorrow lay ahead of him. In Isaiah 53 Leopold discovered the suffering Messiah. He couldn’t get around it, Yeshua and Jesus are one and the same Person.

When Leopold started to witness openly, he was branded as a traitor and apostate. His life was in danger and he had to flee to Scotland. Until his death he was a blessing for many and through him many Jews found their Messiah.

Isaac Ostrovsky, ‘This book is ours!’

We would love to hear how you met Yeshua. Click on contact to share your story with Jewish Testimonies.
Abraham Capadose, ‘I wait for Thy salvation, o Lord!’ (1795–1...