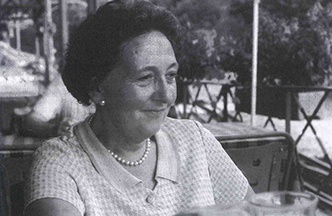 Lisette Hutton-Orscher was completely broken after the Holocaust, but she has experienced that the Lord Jesus has given her everything she needed. She knew that because of that she could understand others and help them to find peace for their tired hearts. In this testimony she would like to show the grace of God and His wondrous ways. Ways in which we often have to carry a heavy cross, but in which we also receive many blessings.

I grew up in Belgium in a Jewish family. My parents lived in a large house. They had five children and sheltered Jewish refugees from Eastern Europe. For this they had many servants and among them was a Christian girl. She was a simple girl from the country and had received little education. However, she had a wonderful treasure, she loved the Lord Jesus and also loved the Jews. We could not understand how she, a Gentile, could love the Jews so much. At that time I was a small girl that loved the Lord. My mother taught me how to pray in Hebrew, but I liked to listen to this servant girl that told me all the stories of the Old Testament. My mother died when I was very young, but this girl stayed with us and helped us faithfully.

A Bible as wedding present

When I got married this girl gave me, as a present, a Bible, the Old and New Testament in French. After our wedding day we moved to England where my husband had a large business. However he had to travel a lot for his work and because of that I felt lonely at times. At those times I would read this Bible, but I never would open the New Testament. I was afraid of that, because I was a Jew.

We went back to Belgium frequently to visit our family. At a wedding I met a young Jewish girl, Maria, who I knew from before. She was very sad as her father had died and her mother had remarried. Her stepfather treated her very badly. I felt sorry for her and said, “Maria, I have something for you that will help you not to feel so lonely.” I gave her my Bible and kept on corresponding with her from England. After a few weeks I noticed a large change in her letters. On our next trip to Belgium I visited Maria. I hardly recognised her. She was not sad anymore, but looked happy. She said, “I didn’t follow your advice not to read the New Testament”.

The blame is mine

Maria read the New Testament first and then the Old. She told me that, through the grace of God, she found the Lord Jesus as her Messiah in the Bible, without going to some gathering or without meeting a preacher. I was in shock. I felt I was to blame that I was the reason that Maria believed in Jesus. I told her, “You are on the wrong road, Maria. You are lonely. You need to meet people.” Maria smiled and said, “No, I know now, that my Redeemer lives. He has saved my soul. He is my Messiah.” She begged me to read the New Testament too.

My heart was broken, because I thought I had done something very bad. Back in England I started to pray to the God of Abraham, Isaac and Jacob. I told Him, that I was afraid that I had made a mistake and that I wanted to read the New Testament, but that I was afraid to end up on the wrong road. I asked Him to show me the truth.

Then I started to read the New Testament and praise the Lord, everything became clear. I felt that I was a sinner just as my own people, the Jewish people. I felt that I needed salvation. I went down on my knees and gave my heart to the Lord Jesus. I cannot describe to you the joy that filled my soul.

My husband evangelist in Auschwitz and Dachau

My desire was that my husband would be saved, too. With a firm belief I started to pray for him. In 1939 he had to join the Belgian army and during heavy bombardments he felt he was not ready to meet God. He realised he was a sinner and amongst many dead soldiers, he fell on his knees and gave his heart to the Lord Jesus.
In 1942 the Germans started a heavy persecution of the Jews in Belgium. Our family asked us if we could help them. We could not even protect ourselves, but had peace, because we knew that the Germans could only kill our body and not our soul. We were prepared to offer our lives for our family to show them God’s love and our love.
In 1944 my husband ended up in a concentration camp. He was a great blessing to the prisoners in the camps. From the moment of his conversion, the Lord has blessed him wonderfully with a great gift as an evangelist. The war didn’t bother him, he had only one goal: to serve his Lord and Saviour and to glorify Him.

Risen out of the ashes

After the war I was completely broken. We had lost everything in Belgium, in England, our company, everything and I had no home. At the age of 27 I was a widow with a daughter of one year old. My father was an old man and my mother in law was totally broken. She had lost both her sons, a grandchild, a brother, sister, brother in law, a sister in law and a cousin. I went on my knees and said to the Lord, “You are my Father. Give me the strength to give my parents, my mother in law and my baby a good home.” I also said, “If I ever get a house again, it will be dedicated to you.” I have experienced with joy that the Lord Jesus is a Husband of the widow and the Father of the orphan. I don’t have a beautiful house, everything is very ordinary, but for all that I have, I say, “Thank you, God. Thank you, Lord,” because He has given me everything that I need. He has helped me to build a new home on the ashes of my previous life.

I have suffered a lot, but I would not like to have missed it, because the Lord has brought me into contact with many unhappy people. I can see now why I had to go through all this misery: because I can understand the suffering of the people who come to me. I have been spared to help others to find peace for their tired hearts.

Louis Kinsbergen, 'Apprehended by the Gospel'

We would love to hear how Yeshua revealed Himself to you. Click on contact to share your testimony with Jewish Testimonies.
Jacob Gartenhaus, ‘I would rather die than renounce Him’ (1896-...