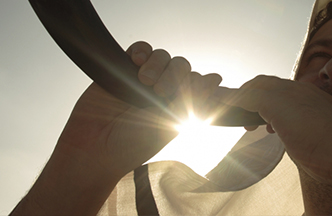 I still remember vividly the Yom Kippur that I took part in when I was ten years old. Though I was not yet bar mitzvah, I insisted that I, too, would fast and attend the synagogue services, despite my parents’ objections. After all, I wanted my sins forgiven! With childish zeal, I entered into all that made up the service of the day. I listened attentively to the reading of the Holy Scriptures, recited as I was able the ancient Hebrew prayers and was stirred to my depths by the cadence of the cantor’s voice.

With my whole heart I sought the forgiveness of sins that I believed was to be gained by the observances of the day. Yet even as I returned home that night, walking with my father through the darkened streets, haunting questions remained, “Has God really heard my prayers? What real assurance do I have that my sins have been forgiven?”

The answers I received from my Jewish teachers proved not to be sufficient, for they did not assuage my doubts. Eventually I stopped asking the questions that seemed to have no answers. I pursued studies in science, engineering and philosophy and participated in life’s pleasures. My religious training kept me away from falling into the grosser sins, but I ended up as an agnostic. Yet, with all the searching, I still considered myself a Jew. Below the surface, ready to be aroused when the time of challenge would come, were the unanswered questions, “Who am I? Can I know God? What follows death? Can I have the positive assurance that my sins are forgiven?”

I completed my education in engineering, took a job and found myself working with a technical assistant who thought he was God’s ambassador. He did this in my lunch break during the walk from the company to the railway station. He didn’t let go. During the next two months I insulted him and I did anything to get him away from my office, but he always kept that smile on his face. When I came with objections, he always had parts of the Scripture to reply to me. I asked myself how it could be, that this ‘goy’ (Gentile) knew so much about our Tanakh. In fact I should be the one to know all these things. I never answered him when he came with his arguments. The only thing that I ever said to him was, “Is this all you know?” He replied, “It is enough and it is especially for you’.

Because all have sinned

After three months he put his Bible on my desk. He said, “Read it, it will not hurt you. What you think about it is a matter between you and God.” I was fed up with it so I promised him that I would read it. “I will read the New Testament and will find all the mistakes and gaps.” I thought by myself. “Then I will prove to him that his belief has no foundation and I will tell him that he should not bother me again.” I decided to start in Romans. The largest part I didn’t understand, but the Lord started to speak to me. I came to Romans 3:23, “…for all have sinned and come short of the glory of God…”

By Jews, for Jews

Soon I made the next discovery. All the writers of this book are Jewish and they write about Jewish matters, matters I knew about! It appealed to me. The only parts that gave me problems were the places where Yeshua was called God. Yet the book I expected to be anti-Jewish, was written by Jews, for Jews.
A few months later my colleague asked me, “Now, what do you think?” I answered him that Jesus could be the Messiah. “Do you think so?” said my colleague and he added “You must be sure, with your whole heart!” I don’t know what happened next with me, but I shouted, “No, I don’t want!” I ran upstairs to my office and smashed the door. I didn’t want to see this colleague anymore!

The next day he walked in as if nothing had happened. As usual he sat opposite me at lunch. He spoke about all sorts of things, but not one word about belief or Yeshua. This went on for about a month. I started to feel more and more uneasy, then God spoke to me, “You know the truth, what are you going to do with it? Why are you running from it?” I tortured myself for a month with these questions until I finally gave in. I prayed, “Lord, it is enough!” I knelt beside my bed and asked Yeshua to come into my heart. I remember I felt an intense peace that I had never experienced before.

I only understood the zeal of my colleague to make the Messiah known to me when I started to read the beautiful book of Hosea. It shows us the wrestling of God for His people. His unending love never gives up. It was this love that stimulated my colleague not to give up.
In Jewish tradition, ‘tzadik’ (righteous) is spoken of. According to tradition, the tzadik is the one who comes from God with the fire of His altar. He comes to the world and reaches out to the loneliest people and brings the fire of God to their hearts to bring them into the presence of God. I have discovered that Yeshua is the Tzadik, but He is more than that! Yeshua is the One that we want to make known to our people. He can change the lives of people. May many of my people, just like me, come to know His love and truth!

Estelle Stewart, ‘Without Him I would have no life’
Scroll to top