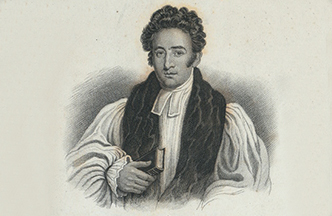 That Michael Alexander would be the first Protestant Bishop of Jerusalem was hardly expected at his birth. His parents raised him according to the strict principles of Orthodox Judaism. Michael was a quick pupil. At the age of sixteen he became a teacher of the Talmud and of the German language. In 1820, in his twenty-first year, he came to England to do the same and also to perform the duties of a shochet (Jewish ritual slaughter).

Growing up in Prussia he had only studied Judaism, he had not had the slightest acquaintance with Christianity and did not even know of the existence of the New Testament. His knowledge of Christ was limited to some strong language.

After some disappointments in London, he decided to move to Colchester. In one of the streets of Colchester a handbill aroused his curiosity. It was the announcement of the Annual Meeting of the London Jews’ Society, an organisation that spread the New Testament among Jews. He wanted to know more about that, so Michael obtained a New Testament and started reading it.

Searching for the truth

In 1821 Michael married Miss Levy in Plymouth, where he was later appointed as a rabbi. In the providence of God he became acquainted with Rev. Golding, to whom he gave lessons in Hebrew.

After much inward conflict he came to the conclusion that he had to acknowledge the truth of the New Testament. He used to steal silently down to the church of Golding on Sunday evenings and listen, in the shadows, to the Christian praise songs. It was not long before his Jewish brothers got to hear about this and consequently he was discharged as a rabbi. Now he could openly attend the services of his friend.

When he was baptized in St. Andrew’s Anglican Church in 1822, the interest was overwhelming and by the time Michael was 28 he was ordained as deacon in Dublin. It was very rare in that time that a converted Jew got an ecclesiastical office. Later he was even ordained as a priest.

When Michael joined the London Jew’s society, he wanted to become a missionary among the Jews. First in Danzig (1827-1830) then later in London (1830-1841), he witnessed to his brother, who was a rabbi in Posen (Poznan). “I was a sheep astray, far from the flock of my Saviour, not aware of the Lord who bought me.”

In 1841, after his professoriate in London, Michael was ordained as the first Anglican bishop of Jerusalem. In his last sermon on English soil he spoke from Acts 29:22-24, ‘And now, behold, I go bound in the spirit unto Jerusalem, not knowing the things that shall befall me there…’
He served in Israel for only four years, but these were years of abundance with many Jews finding their Messiah. With his sudden death in the autumn of 1845 there came an end to a life of serving and witnessing of his Lord and Saviour, Jesus Messiah.

We would love to hear how you met Yeshua. Click on contact to share your story with Jewish Testimonies.
Marcus S. Bergmann, a Chassidic Jew receives eternal life (1846–1923)

Karl Kunert, ‘Justification is only through Jesus Christ.’ (187...
Scroll to top