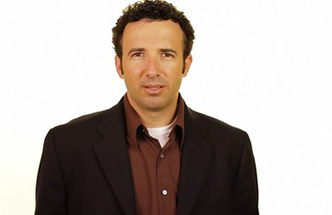 I was born and raised on a Kibbutz (a collective farm in modern Israel) in Israel. As a child, I was somewhat aware of God’s existence, but lived a completely secular, ungodly lifestyle. At the age of 13, I made my Bar Mitzvah out of respect for my grandparents, who were Conservative Jewish people. However, I became a disc jockey in nightclubs and from that time, I was exposed to the drinking and partying lifestyle.

At 19, I joined the Israeli Defense Forces (IDF) like every Israeli is required to do. In January of 1995, I moved to a new unit. During the same month, an event happened that changed my life forever.

On a Sunday morning, we heard on the news of a suicide attack that took place where my old unit met. It was a day of great uncertainty and we feared the worst – the loss of my friends’ lives. Twenty-two soldiers, several of whom were friends of mine and one civilian were murdered in this horrible event. That incident not only drew me further away from God, but also brought a lot of anger against the Arab people.

In 1997, I left Israel after not being able to stand the reality of more friends dying and people in general who were being killed. Through various circumstances, I found myself in the United States of America.

A family that I knew invited me to their church. Upon my arrival at this church, I was surprised to discover the love that these people had for Israel and the Jewish people. That love and the wonderful music they had in their service gave me the desire to return again. At one of the services, the pastor made the statement, “In order to know God in a personal way, you need to have faith in Jesus.” He was teaching from the Book of Hebrews and said that my people, the Jewish people, although they revere God they do not know Him personally. Although I was a secular Jewish man, this statement angered me. I thought he was giving an anti-Semitic message! I went to challenge the pastor about his message and in response, the Pastor challenged me to go and read the Word of God and then come speak to him. When I arrived home, I found the book ‘Why Me?’ by Jacob Damkani. As I opened it, I saw comparisons between the Tanakh and the New Covenant Scriptures, which captured my attention. As I read the book, my whole body shivered and I got goose bumps as the Word of God came alive to me for the first time. I had no doubt that God existed and that Yeshua is the only way.

Yet as a Jewish man I thought that Yeshua, whom I viewed as Jesus, was only for Christians. I also feared the rejection of my family and friends and I did not want to hurt my parents whom I loved dearly. I asked God to show me His power in my life and to give me the security of His existence.

Since that time, the Lord has faithfully shown me His power and might. One of the biggest miracles was a change of my heart attitude toward the Arab people, whom I hated. I was invited to share the story of my life at a conference with Jewish and Arab disciples of Yeshua, the Messiah. I came to this conference with a heavy heart, as I viewed all Arab people in the same way. It did not matter to me whether or not they were Christians or Muslim – they were still Arabs. When I finished sharing my story, a Palestinian man approached me and introduced himself as Taysir Abu Saada, a former PLO member. As I took a step back, he told me that he loved me, I was shocked! It was a minute later that I found myself shoulder to shoulder with an ex-enemy, praying with tears for the peace of our people in the Middle East. Taysir shared his story at the same meeting and when he finished, he called me on the stage and asked for forgiveness in the name of his people for the killing of my friends. I asked him for forgiveness for the anger, hatred, mistrust and not being able to forgive the Arab people. Only a true and gracious God can perform such a miracle. To God be the glory!

Nathan Scharf, 'I came to Jesus as a sinner'

We would love to hear how Yeshua revealed Himself to you. Click on contact to share your testimony with Jewish Testimonies.
Sam Rotman, raised in an orthodox Jewish family

Rabbi Loren Jacobs, Jesus made me kosher
Scroll to top