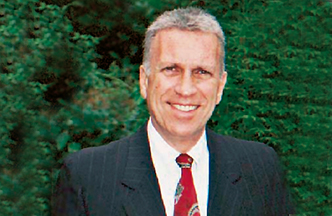 As a child, Paul Liberman was deeply touched by the words from Psalm 118:22 ‘The stone which the builders refused is become the head stone of the corner.’ “What or Who can be this Stone?” Paul wondered, “Is it that Jesus of Nazareth against whom the rabbi warns us so much?”

I was only eight years old when I started to fire questions about God at my parents, but their replies were hardly satisfying. I longed, therefore, to go to an orthodox Jewish school. My father was not happy about it because it was so expensive, but my mother knew how to persuade him. Yet this school didn’t bring a spiritual breakthrough in my life.

When I started to earn some money after finishing my education, my interest in religion was pushed aside by the desire for money. For fifteen years that was my religion. Owing to my follow-up study at a liberal university, I even started to doubt if there was a higher Being. As my job didn’t promise much financial success, I decided to give up my economic ambitions and go into politics. This all went well, and anything I did, I was successful. Then I got an interesting job in a business office in Washington, but the joy was short-lived. The man who hired me was dismissed and soon after I met with the same fate.

Worries about the future

In this uncertainty I worried about the future. Looking for work I used public transport a lot. On the bus I regularly saw a lawyer who was always reading his Bible and one day we got to talk with each other. I told him that I thought that the course of events in life sometimes is so unusual that it looks like everything has been programmed. “There must be a programmer,” I said. He knew that I was Jewish because of my Jewish name so he showed me the prophecies in the Old Testament that point towards the new state Israel. I was very interested in this, so on further journeys I always sat down next to him.

Once he asked me with a penetrating look, “What do you do to get into heaven?” “I try to be a good human and further hope for the best,” I replied. He then said, “According to the Old Testament, that reveals to us the future so accurately, a bloody sacrifice is needed to reconcile sins.” When he started to talk about blood I didn’t want to continue speaking with him any further. Just before I stepped out of the bus angrily, he gave me a booklet that contained more than 300 Messianic prophecies from the Old Testament. These appealed to me so much that I went to a library to read “The story about Jesus”.

God on my side!

After reading the New Testament, I couldn’t understand why we Jews had so little respect for Jesus. He didn’t do anything other than helping people. Could He really be the Messiah, as He said Himself? I prayed, “If you are really God, show me if the “carpenter of Nazareth” is the Messiah.” I reached a crucial point. My prayer had been sincere and if God couldn’t hear that, I knew for sure that He was fiction. However, if there really was a God that sent the Messiah, I knew that He would answer my supplication and that Jesus was my Messiah.

At that time I also read about many other religions, but nothing touched me so much as the Bible. The Bible consists of many books, written by different people over a long period of time. However, it seemed as if all these Books were written by one Author. Slowly the truth of the Gospel started to penetrate my heart, “Whatever people say…,” I considered, “if God is on my side, what does it matter!”

In the months following I got to know a number of other Jewish believers and I needed those contacts, because for two years my wife thought that I had gone mad. Someone told me, “You are the only Bible, that she may ever read.” I understood the message and decided to actively show her that I had been changed. God worked it out this way, that she also started to read the New Testament and became a believer.

Now we had a new problem. How were we to raise our children? We didn’t want them to have a double identity: Jewish and Christian and my wife only felt happy when she prayed with other Jewish believers to God. Everything else she experienced was in conflict with her Jewish heritage. Concerned about the unity in our family, I started to speak with other believers about the founding of a New Testament church in our own Jewish style. They were motivated and so we held our first gathering on May 18th 1973. We had invited a Jewish evangelist and later we got a Jewish pastor for our own small group.
In time I was able to devote myself full time to spiritual work. We moved to Israel and I got involved in the leadership of several Messianic organisations and church in both the United States and Israel.

In a miraculous way the desire of my childhood to get to know God and to be available for Him was fulfilled. What a richness to let the Lord lead your life!

We would love to hear how you met Yeshua. Click on contact to share your story with Jewish Testimonies.
Ceil Rosen, ‘If I have to choose between God or you’

Alexei, ‘The real meaning of life’
Scroll to top