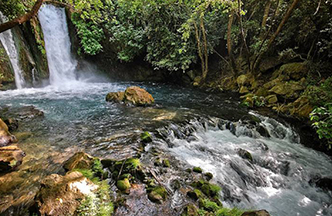 Rabbi Chil Slostovsky admonished his students to abhor Jesus. Yet when he started to read the New Testament, he felt like a thirsty man who drinks greedily when he has found a spring of fresh, cool water.

Terrible stories in the Talmud

As a descendant of a number of orthodox rabbis, I received a strict rabbinical education. I thank God that I was able to obtain the highest diplomas of two rabbinical seminaries at the age of seventeen. These distinctions, however, did not satisfy me and I continued earnestly to study the Talmud and other rabbinical works. I became a rabbi and professor at a rabbinical seminary. In my lectures I admonished the students to abhor Christianity and Jesus Himself. I believed all the terrible stories about Jesus as contained in the Talmud.

Through God’s wise foresight however, I became acquainted at that time with a well-educated missionary. What he told me was very interesting so much so that I paid him frequent visits. Very soon my relatives got to know about this and became very perturbed. They decided to write to the chief rabbi of Palestine. He was told of “the great danger, which threatened my soul.” They implored him to have pity on my soul and to save me from ‘the great danger’ by extending to me a call to Palestine. The chief rabbi sent me a letter in which he mentioned quite casually that he could get me a permit to enter Palestine should I wish to come there. I was delighted at the prospect of going to the land of my forefathers and accepted his suggestion joyfully. Shortly after my arrival the chief rabbi appointed me as secretary to the chief rabbinate of Jerusalem. Moreover he continually showed me his special favour. His interest in me became so obvious that one day I frankly asked him about this. Then he told me of the correspondence with my relatives and tried to convince me of the ‘falseness’ of the missionary’s teachings. I began to think that he might be right.

One day I travelled in the company of several members of my committee by train from Haifa to Jerusalem. Opposite me in our compartment there sat a young man reading in the New Testament in Hebrew. At once I knew that he was a Jewish Christian. In the presence of the members of my Committee I felt obliged to protest to the young man. However he smiled at me and said, “Perhaps you will show me what you find offensive in the book and I will try to explain it.” When he had said that, my thoughts suddenly went back over the years to the time when I had read a little in it. I knew there was nothing repugnant in the book. However, the presence of my fellow travellers annoyed me. I said to him, “How can I show you wrong statements in a book which we are forbidden to read?!” The man answered, “How can you criticize and judge something of which you have no knowledge?” I remained silent. I knew that he was right. Obviously the young man noticed the confused expression in my eyes. He whispered to me, “I see you are interested in these things, may I give you this New Testament? Please take it.” While my committee was looking out of the window, I quickly took the little book and put it in my pocket.

A spring of fresh, cool water

That same evening I began reading the New Testament in my room. Before opening it I had prayed, “Open thou mine eyes, that I may behold wondrous things out of thy law.” (Psalm 119:18). In His grace, the Lord heard my prayer and while reading I felt the creation of a clean heart and of a right spirit within me (Psalm 51:10). There was new light (Ps. 119:105) and I felt like a thirsty man who drinks greedily when he has found a spring of fresh, cool water. In one long draught I read the Gospels of Matthew, Mark and Luke! With every page there grew and deepened the conviction that Jesus Christ is the Messiah prophesied to us Jews.

A lunatic or God Himself

Slowly but surely my burdened heart, soul and spirit became free and joyful. The Sermon on the Mount opened up before me a new world, a world full of beauty and glory. The Proclaimer of such a lovely world cannot be evil. The words, “Heaven and earth shall pass away, but my words shall not pass away” could have been spoken only by God Himself or by a madman and from the answers that Jesus gave the Scribes and Pharisees it is abundantly clear that He was exceptionally wise. Therefore it cannot be otherwise but fact that He was truly God, as His disciples maintained (John 20:28).
I was deeply impressed also by Luke 23:34, “Then said Jesus, Father, forgive them; for they know not what they do.” Compare this utterance with that of Jeremiah when he was oppressed. Jeremiah was enraged and cursed his persecutors. Jesus, on the other hand, even when nailed to the cross, had nothing but forgiveness, mercy, sympathy and prayer for His persecutors. What a difference! How much greater was He than the prophets were!

My soul was so touched that for the first time in my life I knelt down and prayed. I wept and beseeched Him to show me the truth and for the first time I prayed in the name of Jesus! After that prayer there came into my heart such peace and joy as I had never experienced before, not even on the Day of Atonement even though, on that day, I always fasted and prayed fervently. Never before had I such certainty of reconciliation with God and it remained with me ever since. I knew without any doubt that the Lord Jesus is the long prophesied Messiah of the Jews and the Saviour of the world and I came to see in Him my personal Redeemer. Then I heard a voice say to me, “Never again wander away from Me! I will use you for the glory of My name and as a witness to My saving grace.” This was not imagination but fact and I answered immediately, “Lord, here am I.” From then on, my life no longer belonged to me but to Him and so it is still. For in that solemn moment I surrendered myself completely and unreservedly to Him. Even that, I felt, was little enough as repayment for all He had done for me when He saved my soul from eternal damnation.

At first I was no more than a secret believer and continued to fulfill my tasks and duties as rabbi. After two months I realised that I could no longer lead a double life and serve God and mammon (Matthew 6:24). I had to confess Christ publicly whatever the consequences might be. The same day I resigned as rabbi and I witnessed to my committee frankly of the Messiahship of Jesus telling them that He is the long expected Messiah and my personal Redeemer. Immediately persecutions followed, I was stoned on the street, but they did not intimidate me in anyway. A prominent Jewish man offered to adopt me as his son and heir, provided I would renounce Christianity. I told him, “If you can give me peace for my soul, procure me the presence of God and pardon for my sins, I will return to Judaism.” I decided to enter a Bible school and witness every day to my own people of Jesus Christ.