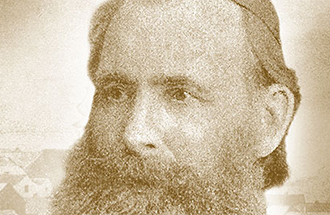 Isaac Lichtenstein was not quite twenty years old when he became a rabbi. After officiating for several years in different communities in northern Hungary, he finally settled in Tápiószele. There he served the local Jewish community for nearly forty years.
Early in his career, a Jewish teacher in the communal school of his district casually showed him a German Bible. Turning the leaves, his eye fell on the name ‘Jesu Christi’. He became furiously angry and sharply reproved the teacher for having such a thing in his possession. Taking the book, he flung it across the room in a rage; it fell behind others on a shelf where, dusty and forgotten, it lay some thirty-odd years.

Anti-Semitism and the New Testament

Then during a fierce wave of anti-Semitism in Tiszaezlár, situated on the Tisza, thirteen Jewish people were thrown into prison. They were accused of killing a Christian girl in order to use her blood for ritual purposes. As in every other case this satanic accusation was false and baseless. Strangely enough, it was this incident which first drew Rabbi Lichtenstein to think that there had to be something in the teachings of the New Testament that stimulated the enmity to the Jews. While he was browsing through his books, he saw in a hidden corner the New Testament that he had thrown there in his anger some thirty years ago. He picked up the book and all kinds of memories flashed through his head. The bitter experiences and grief that made him suffer since his youth by the hand of people that called themselves Christians.

It was no wonder that Lichtenstein held the view that Christ Himself had to be the plague and the curse of the Jews. It was remarkable therefore that the exact anti-Jewish crime in Tiszaezlár, where many misused the name of Christ as a cover for their practices, drove the Rabbi to read the Brit haChadashah for the first time.

After some hesitation Isaac Lichtenstein opened the book, turned over its leaves and read. “Immediately I was captured by the greatness, power and glory of this Book, formerly a sealed book to me. All seemed so new, yet also very familiar. It was like the sight of an old friend who has laid aside his dusty, travel-worn garments, and appeared in festive attire, like a bridegroom in wedding robes.” Lichtenstein could come to only one conclusion, “Yeshua is the Messiah!”

For some years Rabbi Lichtenstein kept these convictions to himself. He began, however, to preach new doctrines in his synagogue, which both interested and astonished his hearers. At last he couldn’t contain himself any longer, preaching one Sabbath about the whited sepulchre, he openly avowed that his subject was taken from the Brit haChadashah. Subsequently he spoke of Yeshua as the true Mashiach, the Redeemer of Israel.

Ultimately he embodied his ideas in three publications, which created a tremendous sensation among the Jews, not only in Hungary, but also throughout Europe. No wonder, for here was an old and respected Rabbi, still in office, calling upon his people to align themselves under the banner of Yeshua of Nazareth.

As was inevitable, a storm of persecution broke loose upon him. Lichtenstein, who was counted among their most noble leaders and teachers, was now portrayed as a disgrace, an apostate that had sold himself to missionaries. He had to appear before the rabbinate in Budapest, but Lichtenstein did not give in. He explained that he found in the Brit haChadashah the true Judaism and would remain as before with his congregation. In spite of many persecutions and reproaches he continued to teach and to preach from the Brit haChadashah. To Christian organisations that sought his services, he had but one reply, “I will remain among my own nation, I love the Messiah, I believe in the New Testament but I am not drawn to join Christendom.” He remained among his own brethren, to plead with them to behold in Yeshua the true glory of Israel. For over twenty years Rabbi Lichtenstein witnessed in many parts of Europe to the truth of the Messiah.

At last the storms of controversy, of misunderstanding and antagonism, began to tell on him. His spirit, however, remained undaunted. About this time he wrote, “Dear Jewish brethren, I have attained the age of eighty years. When others of my age are reaping with joy the fruit of their labors, I am alone, almost forsaken, because I have lifted up my voice in warning. I am become a butt of mockers who point their fingers at me. Yet while I live, I will stand on my watchtower though I may stand there all alone. I will listen to the words of G-d and look for the time when He will return to Zion in mercy and Israel shall fill the world with his joyous cry, “Hosanna to the Son of David! Blessed is He that cometh in the name of the L-rd! Hosanna in the highest!”

We would love to hear how Yeshua revealed Himself to you. Click on contact to share your testimony with Jewish Testimonies.
Meijer, a Jewish boy who believed in Jesus