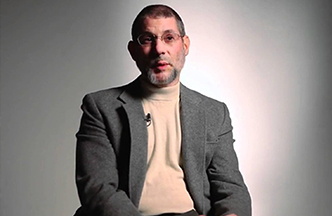 I’d like to begin my story at the time of my great-grandparents, most of whom lived near the city of Kiev, in the Ukraine, around 1900. At that time, life was becoming increasingly difficult for many of the Jewish families in Russia and the Ukraine, including my own. My family left the Ukraine, and came to the United States during the first decade of the 20th century. In the generations since we left Russia for America, my family never showed a deep faith in God or His Word. Consequently, growing up in the Chicago area in the 1960’s, I was immersed in a culturally Jewish, but otherwise secular and materialistic worldview.

Few, if any, of my Jewish friends, family, or teachers at synagogue, believed in a God who could create the universe in six days, intervene in human history, or perform miracles. The idea of having a personal relationship with God, like Abraham, Moses, and David had, was unheard of. The Holy Scriptures were regarded as good for teaching morals and ethics, but not to be taken “literally.” Matters concerning the supernatural – such as heaven and hell, angels, demons and the Messiah, were not acknowledged.

We celebrated the holidays as a part of our Jewish tradition, but the living God played a very little role in our day-to-day affairs. As I result, I sensed that something was missing from the Judaism to which I was exposed, and I began investigating other philosophies and religions. I started by reading some of the great Western philosophers such as Plato and Aristotle. Then I began drifting toward Eastern philosophy. I took up Transcendental Meditation, repeating my “mantra” over and over, every morning and evening, for more than a year.

During my first year at Northwestern University in Illinois, I took a course on Medieval Philosophy. Little did I know that the greatest minds during this thousand-year period in Western Civilization spent most of their intellectual labors attempting to prove the existence of God! The philosophers reasoned, “How else do we explain the evident order and design in nature? Why else do we all have an inward sense of right and wrong? And why, throughout all cultures and societies, has there been an intuitive awareness of God or gods?!” As I studied their powerful and persuasive arguments, I became convinced that God had to exist.

Shortly after that, I began reading the Holy Scriptures for the very first time. After attending a seminar on Biblical prophecy, I read the entire New Testament portion of the Scriptures within a week! Then I began discovering prophecies in the Jewish Scriptures which predicted the coming Messiah, the Anointed Ruler and Savior sent by God. I was amazed to discover that the prophets of Israel had told us that a descendant of the tribe of Judah, from the royal family of King David, would be born in Bethlehem. According to these prophecies, He would come before the Second Temple was destroyed in 70 AD, accomplish miracles, then suffer, die, rise from the dead, and yet fail to be recognized by the majority of our people! Through the Messiah, God would also establish a New Covenant with the Jewish people (see Jeremiah 31:31-34). To me, the evidence was overwhelming – Yeshua was the promised Messiah of Israel who would reconcile us to God.

In coming to know the Messiah, I discovered a dimension of Jewish spirituality that I never dreamed possible! Messiah Yeshua enabled me to develop an intimate personal connection with the God of Israel. I began rediscovering my Jewish heritage. I transferred to Moody Bible Institute, changed my major to Jewish studies, worked with Jews for Jesus, married Martha Brickner, who is a fifth generation Messianic Jew! Together, we have drawn closer to our Messiah, our God, our Land, our Holy Scriptures, our people and our heritage; and God, in His mercy, has enabled us to start Congregation Shema Yisrael. Go to www.shema.com for more information.

We would love to hear how Yeshua revealed Himself to you. Click on contact to share your testimony with Jewish Testimonies.
Rabbi Loren Jacobs, Jesus made me kosher