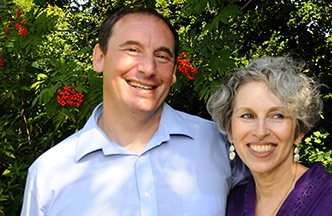 Richard Harvey lives in England, but also spends large parts of the year in Israel. He is a scientist and lecturer at theological institutions and teaches in England, Israel and many other places in the world. He writes and teaches on what it means to be Jewish and believe in Yeshua (Jesus). Read his story about how he came to do this.

Richard Harvey was born in 1956 into a Jewish family. The family, Hirschland, came from Germany but immigrated to England with the rise of Nazism. After the war, his father changed the name to Harvey. His parents were not very religious and the family attended a liberal synagogue. For them, the Jewish festivals were mainly nice occasions to come together with the whole family.

At the age of thirteen Richard decided not to have a bar mitzvah, because he did not believe in God. However, he was curious about the spiritual and supernatural.

During his time at Milbourn Lodge, Richard studied Greek and Latin. He even won a scholarship with his Greek and Latin verse composition for Winchester College, a prestigious school for excellent students. He had a difficult time there as in his old school he was at the top of the class but now, with regard to the classic languages, he was one of the less able students. Although he took part in all kind of activities and clubs, he felt lonely, becoming introverted and depressed. As a result, he began a long process of searching all kind of religions and spiritual experiences but this didn’t bring him satisfaction.

They call themselves Christians

Two of his classmates, Simon and Michael, were unlike the rest. They didn’t only call themselves Christians, but actually seem to believe it. They were made fun of regularly and Richard thought that they were misguided and not prepared to face up to reality. When he argued with them, however, they appeared to be sensible guys and he could not deny the historical facts about Jesus. Is He the Messiah? Simon and Michael believed that He rose from the dead. They had a strong faith in God and had a personal relationship with Him. How was that possible?

Then evangelist, Keith de Berry, came to the school and gave a series of talks on Christianity. The little man had a clear message, “Repent, receive Him, rely on Him.” In his heart Richard felt strongly attracted to this free offer of really knowing God, but could he commit himself so easily?

In a private talk with Keith, Richard voiced his main doubt, an argument he thought no one could possibly refute, ”How can I possibly put my faith in something I have not already proved true for myself? That would be compromising my intellectual integrity.” Keith’s reply floored him, “Are you sure that it’s not just your pride that is speaking?” Richard immediately realized that it was true and he felt like an utter fool. That night he went down on his knees by his bed and asked the Lord Jesus to come into his life and forgive his sins. From that moment on he was sure, “God exists, I can trust Him, even though I have unanswered questions.” The Jewish Richard freely called himself Christian, a loaded term for many Jewish believers and attended Christian meetings. To his surprise his father also started to search for God and came to believe in the Lord Jesus! His mother had reservations and hoped that it would all pass. For her, all religions added up to the same thing, you should be good to people. “Come back to the synagogue and be a nice, Jewish boy,” his other family members said. “Now that you have become a Christian, the old has passed away and you are no longer Jewish,” was the reaction of his Christian friends. What was the truth? Richard decided to find out for himself and started studying theology. He got a certificate in missiology and a degree in Hebrew and Jewish studies.

Sharing the truth with his people

Richard married Monica, a young Jewish believer, who came from a traditional orthodox home and they had a son and a daughter. Richard likes to share the Truth, which he has got to know, with his people. He became the co-founder and member of a Messianic congregation in London and serves with several missionary organizations among the Jewish people.

In 2009 his book ‘Mapping Messianic Jewish Theology’ was published, in which he describes the large variety within Messianic theology. This is also the thesis, with which he obtained his doctorate. Although more studies about the Messianic movement exist, they have mostly been made from a historical, anthropological or psychological background. This is the first extensive study that has Messianic theology as a subject. It is an impressive work, which has been received well within the scientific world.

Meno Kalisher searches the truth about Jesus
Scroll to top