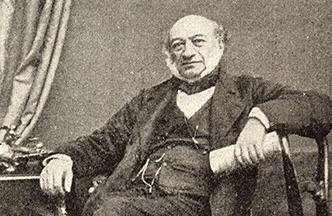 A wrapping paper can change your life totally. That is what Ridley Hayim Herschell experienced personally.

Confirmation to the world

He was born in 1807 in Poznan (Poland) and had a strictly orthodox Jewish upbringing. When he was only fourteen years old, he studied to become a rabbi. He studied the Scriptures very seriously and with great respect. In fear and trembling for righteousness he exhausted himself in prayer and penitence and spent sleepless nights studying the Talmud. He also memorised whole chapters from the Tenach.

A Polish friend brought a change to his religious zeal by challenging him to enlarge his outlook. With the same diligence, he devoted himself to the study of the German language and secular literature. More and more he conformed to the manners of his non-Jewish fellow students and only when he was called ‘Jew’ in the streets, was he reminded of his roots.

Blessed are they that mourn

The death of his beloved mother was a heavy blow to him. Plunged into the utmost grief his conscience woke up and he decided to fast one day a week and to repeat many prayers. This did not calm down his guilty conscience and in despair he cried out, “O God! I have no one to help me and I don’t dare to approach You. I am guilty! Help me, for the sake of my father Abraham. Have mercy upon me!” God didn’t answer him immediately, but his cheerful companions did. Their advice was, “Go to the theatre, find entertainment and a lot of distraction.” Only his soul didn’t find peace, but God didn’t let him go.

One morning he went to a shop where they packed items in a piece of a newspaper or the page of an old book. His purchase was wrapped in a page of the Bible and on his way home his eyes noticed the words ‘Blessed are they that mourn, for they shall be comforted.’ Matthew 5:4. He carried on reading the Sermon on the Mount.

Impressed by Jesus the Messiah

This page of the Bible caught his attention. From which book was this page torn? He had no idea. A few days later he saw a book on the table in the house of an acquaintance. He opened it and read ‘Blessed are they that mourn…’ It was a New Testament, a ‘gentile book’ yet he overcame his aversion and read it from cover to cover. Gradually he became deeply impressed by the person of Jesus Christ. He was moved to tears as he read about the crucifixion, although he didn’t realise at that time that the Lord Jesus also died for his sins.
Conversations with the Reverend Henry Calbone Ridley opened his eyes and on April, 14th 1830 Herschell was baptized. In appreciation he took the name Ridley.

Herschell died rather young, but he used the years that God him gave effectively. Through his preaching many found the Messiah.

We would love to hear how Yeshua revealed Himself to you. Click on contact to share your testimony with Jewish Testimonies.
Leopold Cohn, the quest of a young rabbi (1862-1937)

Christian Solomon Deutsch, ‘About whom is Isaiah speaking?’ (17...
Scroll to top