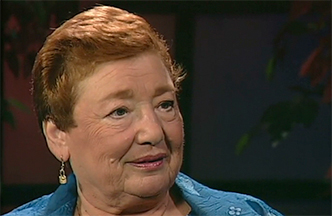 I am a survivor of Hitler’s Holocaust, I survived the concentration camp Dachau. My family was very orthodox and we lived in a little city in Poland. My mother instilled in me that Judaism was life and that mealtimes were family times. Father would come home from synagogue and recite the Kaddish, the blessing over the wine and the challah and then he would bless the children. On Saturday mornings we would go to synagogue, pick up our afternoon meal of cholent from the bakery and go enjoy a Sabbath meal around Grandmother’s table.

Then when Hitler came in to power, change came quickly. We were told, “Don’t come back to the school anymore, because you are Jews.” I was just ten and a half. The Germans threw us out of our homes and put us into a ghetto. Our whole town of Jews was put on one street. At first I would continue to pray, when my prayers were not answered I concluded there was no God.

I was transferred from one concentration camp to another until I was sent to Bergen-Belsen and then Dachau. We were tortured. We were put in a field and forced to dig beets out of the almost frozen ground with our bare hands and they bled terribly. All we used to receive was a very thin piece of bread, mostly of sawdust, and a cup of coffee. That was our food for a 24 hour period. One day I decided that I was going to steal a beet and eat it. When the guard caught me, I got such a bad beating, that even today when I talk about it, I can still feel the cat o’ nine tails on my back and face. The cold weather alone killed many of us. We would have to stand for hours in the snow, half naked and without shoes. One time while we were lined up, we were completely undressed for an experiment to see how long it would take for our blood to freeze. The only reason I survived the experiment was because several people fell on top of me and their bodies kept me warm. Yet there were days when I thought I wasn’t going to make it. Death looked better than life. I did not know the Lord at that time. I thought I was suffering because He put me in there. When we were finally liberated in May 1945, I was full of resentment for what I had been through, I could not forgive. The resentment literally poisoned my body, causing me to need 27 operations.

Despite all this, I immigrated to America, got married and had children. Although I hated God, I became active in the synagogue, but I was dead inside. I did not believe in God, but I believed in maintaining my Jewish identity and tradition.

My daughter believes in Jesus Christ

One day my teenage daughter came to me and said the worst thing I could imagine. She said, “I believe in Jesus Christ and He is the Jewish Messiah.” I nearly had a heart attack. I told her what Jesus Christ did to her family. The Nazi guards told me over and over that because I killed Jesus Christ, He hated me and put me into the camps to kill me. When I was seven, I was hit in the head with a crucifix by a priest in Poland for the ‘crime’ of walking on the sidewalk in front of his church.

My husband became a believer, too. My younger daughter was still going to a private Hebrew school, but somehow I knew that she had secretly become a Messianic believer. I was ready to leave my family, but I couldn’t. I had already lost my first family under Hitler, all because of this Jesus. I ran to the rabbi. At the urging of my family, I asked the rabbi about Isaiah 53. He said, “No Jew reads that.” I asked him about Psalm 22 as well. There are 328 prophecies about the suffering servant Messiah and I asked him about almost all of them. Finally, the rabbi told me not to come to the synagogue anymore.

So I started sneaking down to the basement and reading the New Testament in a locked room. I read Matthew and it showed me that Jesus was a gentle man, He wasn’t a killer of my people. I went to another rabbi, who was also unable to help me. Shortly after that I went to a man’s home, a wealthy Christian businessman, who would open his home as an outreach to Jewish people. He asked me if I minded if he prayed for me, “It’s your house, I don’t care if you stand on your head,” I told him.

He started to pray, and all of a sudden I closed my eyes and said a very simple prayer, “God of Abraham, Isaac and Jacob, if it’s true, if He is Your Son, as they are saying, and He really is the Messiah, okay. But, Father, if He isn’t, forget that I talked to you.” That was the first prayer I had prayed since 1942. I felt the biggest stone rolling off my back. For the first time since the war (and Dachau), I cried and I felt so clean. I knew He was real and I made Him my Messiah. When Holocaust survivors get angry with me because I am a Messianic Jew, I just show love to them because I know how they feel, I’ve been there.

Carl Flesch survived the persecution of Jews in Hungary
2 replies

We would love to hear how you met Yeshua. Click on contact to share your story with Jewish Testimonies.
Michael Brown, ‘How could I, a Jew, believe in Jesus?’