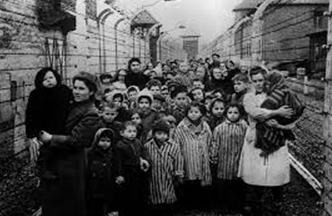 Before the start of the Holocaust, Jewish born Rose Warmer found her Messiah. When her people were being deported, she longed to go with them. She handed herself in, was transported to Auschwitz and brought the people there the Word of God.

Rose was born in a well-to-do Jewish family in Hungary. She studied art, music and dance and led a wandering artist’s life in Vienna and Budapest. In the 1930s when Nazism was rising, anti-Semitism too was growing day by day. Jews were being forced to wear the yellow star and were thrown out of professional jobs to work as cleaners and garbage collectors in the streets.

It came as an enormous shock when the report came that Rose’s brother had been deported to a concentration camp. Although the family barely understood what a concentration camp was, they had heard terrible rumours. Rose’s aging father couldn’t endure the increasing pressure and he died of a heart attack. His sudden death was a traumatic experience for Rose. On the advice of her husband she turned to spiritualism in a search for reassurance about the afterlife, but instead of finding peace her mind became tormented by evil spirits. If these problems were not bad enough, she was humiliated by her husband who was openly unfaithful to her.

Still mourning for her father, Rose looked for hope and comfort in her Jewish Bible. Over and over again she devoured the book of Job, then the Psalms, but she could not make head nor tail of it. She longed to meet someone who could talk to her about the meaning of the Bible. When she learned about a church nearby with weekly Bible studies, she went there and was instantly gripped by the message of the American missionary. He was speaking about the Jewish Messiah! Wasn’t this meant to be a Christian meeting? Here, the speaker was telling her about the Messiah of the Jews! He explained prophecy after prophecy from the Old Testament, each of them fulfilled in the life of Jesus of Nazareth. At the close of the meeting Rose was intently questioning Mr Miller, the speaker. She gladly accepted his offer to meet him and his wife regularly to discuss the Bible.

At these meetings with the Millers, Rose asked all her questions and searched the Scriptures at home to check the answers. When she read the gospel of John she gave her heart to the Lord Jesus Christ, her Messiah. She entrusted her life, worthless in her own eyes, to Him. She was born again and filled with a deep joy! With exuberant joy Rose told the Millers, “I am now a sheep in the flock of the good Shepherd.” She couldn’t keep the good news to herself and began telling her Jewish brethren about the Messiah of Israel. “You need to buy more seats for the church,” she told the Millers, “because I am going out to tell everyone!” While the situation in Hungary became more and more threatening, Rose began quickly spreading the Gospel. The people couldn’t have been more desperate and needy.

Hitler finally occupied the country and in May 1944 the deportation of the Hungarian Jews started. In the early days Rose found shelter, but then Rose saw friends and neighbours with whom she had shared the Gospel, rounded up and taken away by the cartload. Who would tell them about the Messiah, the Hope of Israel? She longed to go with them.

Rose knew that if the idea were not from God, she would never be able to stand under all of the horrors that she would encounter. She sought God’s face and felt increasingly compelled by the Lord to join her people. It was not a whim, but the will of God. She gave herself up into the hands of the SS officers and was transported to the concentration camp at Auschwitz. Despite the horrors all around her, standing attention for hours in the bitter cold, the enduring abuse, whipping and blows, Rose knew the peace of the Lord and His presence with her. She was not afraid of death, to her death meant meeting face to face with her glorious Saviour! At every opportunity Rose witnessed from the Scriptures of the Jewish Messiah, who died to save them from sin and death and to give them everlasting life in Heaven.

Miraculously, Rose escaped the gas chambers and after the liberation the severely weakened Rose slowly started to recover in the safe haven of her sister’s home in Czechoslovakia. At the same time she felt the Lord speaking to her to visit the survivors of the Holocaust. In the midst of their poverty the Lord provided in everything that she needed to support them, parcels of food, clothing and boxes of Hebrew New Testaments. After a short time she even received an apartment. Here, Rose showed hospitality to everyone the Lord sent her way, among who were many Jewish Holocaust survivors.

Not long after the communist takeover of Czechoslovakia, Rose felt a circle closing tightly in on her. Distribution of Christian literature was forbidden. As she watched many Jews leaving for Israel, she felt a deep longing to go with them. It was the same longing, that once made her decide to leave her hiding place and go with her people to the concentration camps. Knowing where God wanted her, she travelled to Israel in 1950. She gave out the Word of God throughout the whole country in newly established schools and kibbutzim and was there a blessing for many.

Read the beautiful biography about her life
Grant, Myrna, Rose’s Journey: A Christian in the Holocaust, Hope Publishing House, 2010.

We would love to hear how you met Yeshua. Click on contact to share your story with Jewish Testimonies.
Rabbi Isaac Lichtenstein, ‘I love Yeshua my Messiah’ (1824-1909...