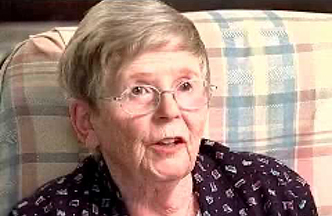 Born in Berlin, I grew up in a Jewish family and survived the Holocaust. We observed the Jewish holidays, thanked God and asked His blessing. I was never told that I had to believe in God, He was just there. In 1938, my father was arrested and held captive during the ‘Kristallnacht’. I was ten years old when Hitler came into power. At the time, Jewish men were getting caught and were taken to labour camps, but my father was in prison, so he escaped the camps. In December of 1938, my father was released on parole and my mother had arranged an escape for us all. My parents, older sister and I fled to Holland. The Gestapo arrested us during our first attempt. I reassured my father, “Don’t worry, God will get us out of this.” and I really believed that. God did just that! It was like a miracle when the Gestapo released us. Our second attempt to escape from Germany proved successful. We were in Holland for less than a year and a half when Germany attacked and occupied the country. We were trapped again and we were constantly living in fear.

In June 1943 we were all shipped to Westerbork and later we were transported to Bergen-Belsen. I kept on praying that the Lord would get us out of this. I count it a miracle that my whole family survived. On a Sunday morning a large group of us were released in an exchange of Americans and Germans. My whole family was set free in January 1945 and in November 1947, my parents and I arrived in the United States. I was a good student and was allowed to study medicine. I began seriously investigating my faith during residency. In conversations with my fellow students, I discovered my lack of knowledge of Judaism. Realising that I didn’t know enough about my own faith, I determined to learn more about God through reading the Bible. A friend of mine gave me a King James Version. I began at Genesis. Finally I came to the prophet Isaiah, chapter 7, verse 14, ‘Therefore the Lord Himself shall give you a sign; Behold, a virgin shall conceive, and bear a son, and shall call His name Immanuel.”

Is Jesus the Messiah?

From that moment on I was asking God every night, “Is Jesus really the Messiah?” I wanted to know it for sure. Reaching the New Testament, I read Jesus’ words in John 14, verse 6, “Jesus saith unto him, I am the way, the truth, and the life: no man cometh unto the Father, but by Me.” My prayer became more intense, “Is Jesus really the Messiah?” God let me struggle with this question for four months, but one morning a soft voice said, “Yes, give all your objections to Me.” At that moment I accepted Him. Jesus Himself came into my life and despite of all that I have lived through, I know that His strength is made perfect in weakness. Later I prayed that the Lord would take the bitterness out of my heart and so He did. We all know that people may hurt us, but we have to forgive and now I am able to do so. His promise is, “And ye shall seek Me, and find Me, when ye shall search for Me with all your heart.” Jeremiah 29:13.

Some say, “It is a disgrace for a Jew to believe in Jesus after what the Christians did to our people in the Holocaust.” I lived through that nightmare, my family and I. We experienced all the hatred and prejudice that Hitler dredged up from the darkest shadows of the human heart. When I hear people, even Christians, using the memory of the Holocaust to prevent others from telling Jews about Jesus, it grieves me terribly. How can anyone equate sharing the message of love and reconciliation Jesus brought with what the Nazis did? That lie gives Hitler the power to reach beyond the grave and destroy Jews in a way that even his evil mind could not imagine by keeping us from our own Messiah.

Louis Kinsbergen, 'Apprehended by the Gospel'

We would love to hear how Yeshua revealed Himself to you. Click on contact to share your testimony with Jewish Testimonies.
Rose Price, ‘Holocaust, journey to forgiveness in Dachau’

Grandma Bessie, never wanted to have anything with Yeshua
Scroll to top