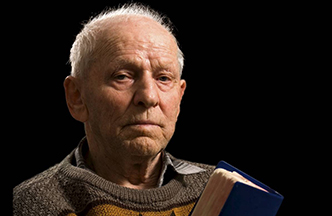 Henryk (later Zvi) Weichert was ten years old when the Germans invaded Poland in 1939. His mother brought him to an orphanage. With his fair hair and blue eyes nobody saw that this sturdy boy was Jewish and so he had a greater chance to survive. As she was leaving she told him, “Be strong and never tell anyone that you are a Jew. From now on you are a man!” His parents ended up in the ghetto of Warsaw and Henryk stayed alive through working as a smuggler, farm labourer, partisan and even through doing jobs for German officers. Often he feared for his life, but his mother’s parting words were an encouragement to him. He witnessed how the uprising in the ghetto ended in blood. Only at the beginning of 1945 the situation changed when the Russian army drove out the Germans from Poland.

After the war, he travelled through all of Europe to the offices of the Red Cross to find again his parents, three brothers and sister. They kept lists of people that returned from the concentration camps. During this long search he heard time after time, “No news.” Emptiness and aimlessness grew. Was there still any meaning in life? He had just tried to survive to see his family again, what was the use of all that shrewdness and perseverance?

When he heard about the possibility to leave for Palestine with other survivors, he regained hope. It was a wearying journey right through Europe and ultimately over sea. They had to avoid the English, because they picked up most of the survivors and put them in camps or even sent them back to Germany. They also brought Henryk and his companions to Cyprus and for many of them this meant another camp experience. In November 1947 they heard that the resolution of the UN about a national home for the Jews in Palestine was accepted. At last also the Jewish people in the English camps could go to Israel and there he received his new name Zvi.

Many of the people who had just arrived were deployed to the Independence War of 1948. Now they had to fight against the Arabic neighbouring people that initially had the upper hand through much better weapons. Around him he saw how many young migrants, who had just survived the concentration camps, died in the battle in a terrible way. Suddenly he realised that he had been protected by God until then. He also wondered, “How did we win this war? Who was with us? Was it God?” He needed to find out!

In Haifa he bought a Tanakh (Old Testament) and in this book he read the text ‘When my father and my mother forsake me, then the LORD will take me up. Teach me thy way, O LORD, and lead me in a plain path, because of mine enemies.’ Psalm 27:10,11. He didn’t have a religious education and asked his friends about the meaning of all the stories and people in this book. Who was this David, who wrote this? How could he, just as Zvi, have experienced abandonment? Also he wanted to know who had been fighting our wars for us? He found out that the Psalms were very clear about this ‘Had it not been the Lord who was with us….’ Psalm 124:1-8.

One day he met an elderly Swiss lady who gave him a small black booklet, a New Testament. He had no idea what it was, but promised her to read it entirely. The book was extremely fascinating to him. Gradually he discovered that it linked up with the Old Testament and that Jesus Christ is the Messiah.

Coming back from work he walked along a place where Messianic Jews came together. After long hesitation he stepped in one night and to his amazement he was welcomed very warmly. He enjoyed the songs and listened to the explanation of the Gospel. Faithfully, Zvi attended the meetings for some weeks, but when he spoke with the leader that he would like to have that peace with God through Messiah Jesus, this man warned him that great hardship, enmity and suffering would be waiting for him. Zvi answered, “He suffered so much for me, that it is a privilege to suffer for Him.” He experienced great peace and joy when He spoke out to God that Jesus, the Son of God is also his Saviour and Messiah. “Now I am a complete Jew,” he knew.

He had not been spared trouble. At work and with his old friends, he experienced real enmity. Some friends remained faithful when they saw that Zvi kept on loving them. He had problems finding a job and a place to sleep. He trusted in the Lord to take care of that, too. In time he got married and was blessed with three sons and a daughter (one of them is Meno Kalisher). Zvi saw this as a partial compensation for what had been taken in the Holocaust. Again he was reminded of Scripture ‘Those who sow in tears shall reap with joy.’ Psalm 126:5. He praised the Lord for all He has done in his life, “The Lord is good!”

More about Zvi you can read in:
McQuaid, Elwood, Zvi, The Friends of Israel Gospel Ministry, Inc, 1978.

Louis Kinsbergen, ‘Apprehended by the Gospel’

We would love to hear how you met Yeshua. Click on contact to share your story with Jewish Testimonies.
Rebecca de Graaf would never speak the name of Jesus (1907-1995)